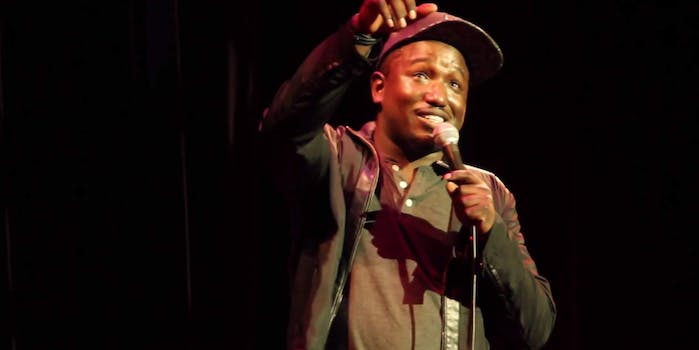 Hannibal Buress stops a heckler in his tracks

'You sir, are a social terrorist.'

Somewhere between opening for Dave Chappelle and sparking a national conversation about Bill Cosby, Hannibal Buress became one of the most biting, essential-to-our-societal-fabric standups. It helps that the guy can quip off the dome like it’s nothing.

Proof positive: During Buress’s weekend at the Grand Opera House in Wilmington, Del., a seemingly drunk rando began barking at his jokes. Buress turned on a dime and spent three minutes reducing the heckler to kibbles.

“Why can’t you hold your liquor?” Buress asked, before clarifying: “I want to give you the excuse of being drunk, and not just being a shitty, obnoxious person.”

The moment sparked a smooth aside, “When I’m drunk I like to ruin one or two people’s nights—a cab driver, a bartender, a woman that I’m seeing… I like to work on a small scale.”

And rather than just clown the dude Buress went righteously defiant: “If you want attention you have to do what I did and work really hard for 13 years.”