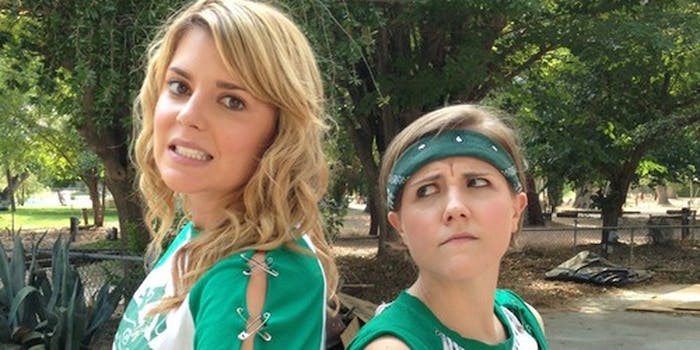 Despite the bunks being well-built facades and the camera crews lurking, the makeshift set of Camp Takota feels like a real summer camp. Young girls in uniforms with the camp logo play together on the swingset, munch on granola and gummy snacks, and run around the wooded grounds.

It’s particularly hot in the Santa Clarita mountains where they’ve been shooting for the past two weeks at Stickleback River Ranch.

The film’s co-stars and close friends Hannah Hart and Grace Helbig, both of whom are making their big screen debut here, look the part of enthusiastic counselors in their green-and-white Camp Takota tees, cut-off sleeves decorated with glitter glue and safety pins. Hart’s wearing a green bandana to keep the sweat off her forehead.

“We share a trailer, and we have become really close with each other,” Helbig says of her co-stars. “Hannah and Mamrie [Hart] shit in the trailer instantly and now it smells awful.”

“You pooped in the trailer today!” Hart counters.

“Yeah, because you already ruined it,” Helbig adds.

Hart takes a step back. “The only drama we’ve had on set is bathroom drama.”

Obviously, the two YouTube stars share a unique bond and uncanny sense of humor. In fact, it’s probably the defining aspect of their many collaborations. Hart, creator of the cooking show My Drunk Kitchen, and Helbig, the star of comedy vlog DailyGrace, have long appeared on each other’s programs, and with Mamrie, successfully completed a comedy tour earlier this year.

Now they’re in the final stages of shooting a feature-length film with producer Michael Goldine that will be released entertainment site Chill this winter. The Dot visited the set to learn more about the film and to see the ladies in action.

Are you happy to get back to acting, Grace?

Helbig: Yeah, I originally wanted to do TV and film, and YouTube kind of came up as a surprise wonderful thing. It was really great that this project made an appearance in my life because it wasn’t something I was actually seeking out, and I’ve had nothing but the best time. Except for that time that was awful.

Helbig: Five minutes ago, I walked here with her (points to Hannah).

Hart: Not often do you have to shoot movies with people that not only do you not like them but they’re just bad people. You just kind of wish not only that you’d never met, but that they never existed.

How do you stand each other?

Helbig: I just live in a constant bubble of repression, and then I go home at night and I shower-scream to get it all out.

Hart: I haven’t stopped crying since we started shooting, but we can work around it.

Helbig: Which has worked really well for a couple scenes, but other than that her character has taken a sad turn.

Helbig: Spoiler! They don’t know about the tots yet!

It’s strict here. I’m supposed to get all my pictures approved.

Helbig: Oh yeah. Michael is very, very on us about not revealing stuff.

Hart: I can say I was crying into tater tots.

Does that actually happen? No one knows!

Hart: They call me a spud muffin.

Oh boy. This interview is done.

Helbig: Can this audio hear my eyes rolling right now?

Tell me a bit about your characters.

Helbig: My character is an emotional mess, so it’s a documentary that we’re making (laughs). She’s a downtrodden women going through a tough time in her life, and she needs the help of some old friends to get her back on track.

Helbig: All the good things have come and gone and now I’ve decided the woods are the best place to go to learn about myself.

This is an adaptation of Walden?

Helbig: No, I don’t. My character is just such a lovable loser. It’s like when you see a deer in the woods, and the deer’s been shot, but it’s not dead. It’s struggling.

Hart: And then you’re like, “Grace what are we going to do?” And then she walks up to the deer and shoots it.

Helbig: Put it out of its misery. So my character dies at the end of this.

Hart: Last weekend was rough for us with that deer.

Helbig: It’s in my backyard still. What’s your character like?

Hart: My character is…

Hart: Sleeve me alone! My character is the heartthrob of the film. Really the focal point of all virility and sexual prowess.

Hart: No, no it’s just an all Allison camp. They call it A-sexual.

Helbig: Everything that is alive at camp is attracted to Allison.

Hart: So it’s pretty hard for her. It’s not that she can’t wear sleeves it’s that they’re always getting ripped off.

Helbig: It’s The Bachelorette but in a movie version.

And in the end you find true love?

Hart: No, god no. I mean, why limit this? Why find true love when you can give true love?