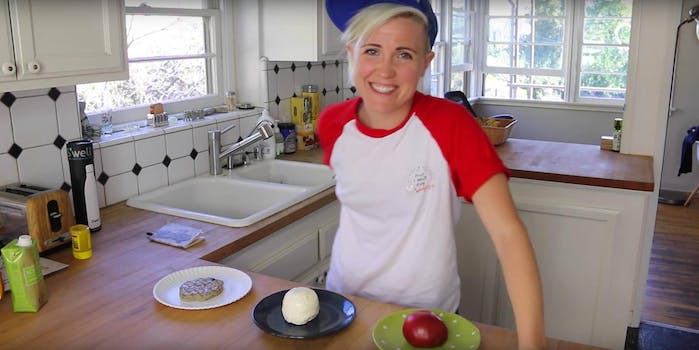 And there's a pretty cool twist.

If you’ve been following Hannah Hart‘s career since her “My Drunk Kitchen” days, you’ll probably be excited to hear about her latest project.

The YouTuber announced Monday via Twitter that she’ll be partnering with the Food Network for a six-episode travel and food series.

While the show is still untitled, the premise seems pretty fun. Like many Food Network hosts before her, Hart will dine out in different cities across the country, but with a catch: Her budget will be determined by what the average cost of a meal is in that town.

The channel is hoping some of Hart’s 2.5 million YouTube subscribers make the leap to cable to watch their favorite non-foodie explore America’s restaurants.

Hart told the Hollywood Reporter that even though she doesn’t consider herself a “food expert,” she is a “food enthusiast” who loves eating and traveling.

“Most of all I love to share my experiences,” she said. “My life has blessed me with so many wonderful opportunities that my goal is to find a way to make them accessible to all. Food Network is the perfect partner for this endeavor and I couldn’t be more proud to call them mine.”

The show is set to premiere sometime in late 2016.