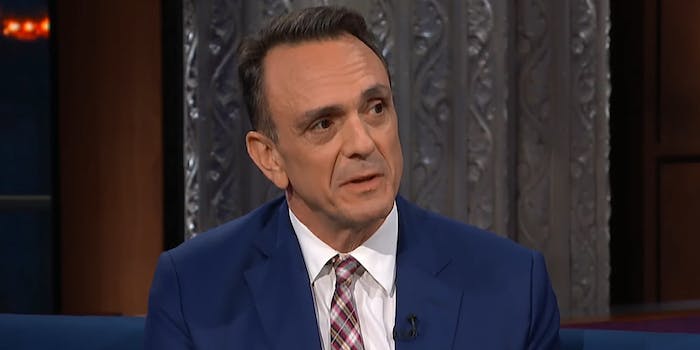 Hank Azaria is ‘perfectly willing to step aside’ from playing Apu

He thinks it's time for a change.

Veteran actor Hank Azaria, who’s voiced more than 20 recurring characters on The Simpsons, stopped by The Late Show on Tuesday to clear the air about one—and offer solutions.

Apu, the Kwik-E-Mart owner built on South Asian stereotypes, has been brought to life by Azaria since 1990. Recently, South Asian comedians and activists have begun a cultural conversation around the fact that Apu is voiced and written by white men, and it’s led to the marginalization of South Asian-Americans. Azaria feels bad about it.

“Do you understand why some Indian-American or South Asian-American actors are offended by the character?” host Stephen Colbert asked.

“It’s come to my attention more and more,” Azaria said. “It sparked a lot of conversation about what should be done with the character going forward. The idea that anyone, young or old, past or present, was bullied or teased based on the character of Apu—it just really makes me sad. It was certainly not my intention.”

He says his “eyes have been open” on the subject and that it’s time to hear the South Asian community on this.

“Listening to voices means inclusion in the writers’ room,” Azaria said, adding that he’s “perfectly willing and happy to step aside or help transition [Apu] into something new… It not only makes sense, but I feel it’s the right thing to do.”

Earlier this month, The Simpsons addressed the Apu backlash during an episode when Lisa, the show’s voice of reason, told Marge that it essentially was an overblown thing that may or not be addressed down the line. A photo of Apu was shown with “don’t have a cow” written on it, Bart’s signature catchphrase from the show’s earlier seasons in the late ’80s. Azaria didn’t think that was cool.

“I had nothing to do with the writing or voicing of the episode,” he told Colbert. “Certainly not the way I feel about it… not the message I want to send.”

Comic Hari Kondabolu, who’s led the Apu criticism via his documentary The Problem With Apu, praised Azaria’s appearance and retweeted fellow South Asians who did so as well.

Thank you, @HankAzaria. I appreciate what you said & how you said it. https://t.co/Otmxygf3DP

Absolutely incredible. Years and years of explaining the simple values of representation, dignity, and inclusion pay off. @HariKondabolu you’ve fought for, and won us (and our parents!) the respect we always deserved. https://t.co/bihahdciEx