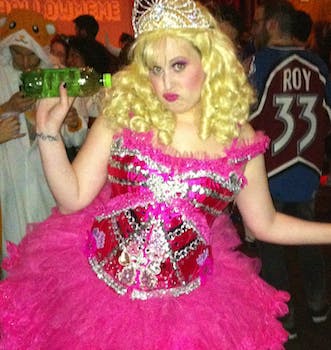 Only at the fourth annual Hallowmeme would you find costumes of violentacrez and Psy impersonators mingling.

Gymnast McKayla Maroney was not impressed when Hillary Clinton checked her cell phone in the bustling Brooklyn bar. Paul Ryan stood in line for a drink in workout clothes, carrying a dumbbell. And in the shadows of the Bell House lurked Michael Brutsch, better known as Reddit’s most notorious user violentacrez, snapping photos of unsuspecting women using a cell phone taped to his foot.

That was the scene at Hallowmeme, a costume party where people dressed as their favorite, and often obscure, Internet meme. Between the army of Psy impersonators and troupe of women dressed in binders, the party was the biggest in its four-year history.

The gala was an example of how memes and Internet culture have become an important part of people’s lives, said Cole Stryker, 28, an acclaimed media consultant, who donned the aforementioned violentacrez outfit.

“It’s just awesome to see Internet culture manifested physically in such a fun, lighthearted way,” Stryker said, while holding a sign that read “Misandry is real.”

“People are aware of these memes and are expressing themselves through these memes. It’s exciting to see Internet culture bleed into the real world in this way.”

The same could not be said for the real life Michael Brutsch, a 49-year-old Texas resident who controlled some of Reddit’s most lewd and violent forums under the name violentacrez. Two weeks ago Brutsch’s identity was revealed in an exclusive Gawker interview that discussed how he ran forums like r/picsofdeadkids, r/nazi, and at one time, r/jailbait, a subreddit that featured sexually charged but non-nude images of underage girls.

The press attention ultimately got Brutsch fired from his job and landed him in the hot seat with Anderson Cooper. The entire controversy was just too good to pass up, Stryker said

“I think they get a lot of shit that’s unfair but at the same time, there’s a stereotype of a typical reddit that I’m invoking here. I wanted to get a flame shirt but this is the best I could do at Goodwill. Michael Brutsch, white, male, lots of time on his hands, had a cushy job that enabled him to jerk off on Reddit all day. So he’s the type of people who become power users. You’re not going to see a single mom from Harlem become a Reddit power user because they don’t have that luxury of free time to accumulate all that following and power.”

Aside from pretending to snap photos with his strategically placed camera, Stryker was a judge for the best Hallowmeme costume of the night. The winner was Lauren Thompson, 25, who spent about $200 to transform herself into Honey Boo Boo, 6-year-old Alana Thompson who competes in beauty pageants on her TLC reality series.

“They eat weird food and stuff but it is a rather loving show,” said Thompson, who took home a goodie bag filled with T-shirts, gift certificates, and an XBox game. “It’s not about everyone hating each other. It’s just about them being silly together. It’s a nice change of pace from housewives fighting I’m not a gigantic fan but I think she is really funny and really a breakout star on ‘Toddlers and Tiaras.’ Good for her. Whatever works.”

Here’s a look at some of the other highlights from the evening.

All photos by Fernando Alfonso III