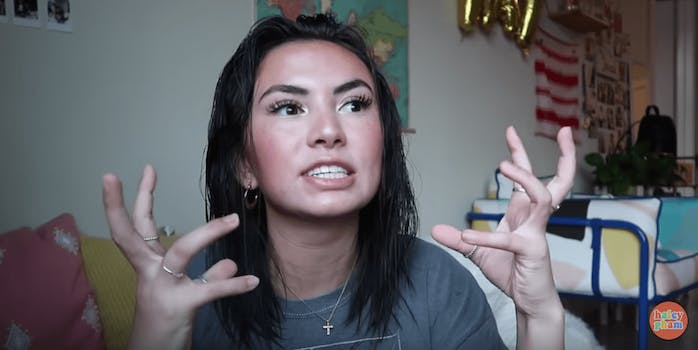 YouTuber dragged for complaining about vacation to Greece

Haley Pham, an 18-year-old YouTuber with more than 2 million subscribers, is facing backlash for a video she posted on Sept. 20 detailing a trip to Greece that she called “the most dramatic thing to ever happen to me.”

In the video, Pham explains the “craziest three weeks of [her] life,” which included a vacation to Italy and Greece. In the 35-minute video, Pham tells her followers how she lost $10,000 due to improper booking on her part. She then blames her bad time on the country’s economic crisis.

“I highly discourage you from going to Greece,” Pham says in the video. “Not only are they economically struggling and just the government is struggling right now, but it’s just like not fun.”

“I’m not even going to explain how dumb and bad she’s making herself look, y’all can listen to this and make your own opinion,” he wrote.

In her video, Pham said the Greek island of Santorini is “not as pretty as the Instagram bloggers make it seem.”

But commenters blamed Pham’s failure to properly plan her Instagram perfect trip and argued that Santorini is definitely Instagram-worthy.

i used to adore haley pham but shes so entitled now? i cant stand her videos anymore, she comes off too much as a privileged brat in her latest video. it sucks really

Pham said she returned to the U.S. only after spending thousands of dollars on her flights home due to another booking mishap. She said once home, she experienced an acute genital ulcer that included a fever and “flower” (i.e., vagina) problems. She then reiterated something she often shares on her channel: She is not sexually active and has chosen to wait until marriage.

“Why would I wait to do anything sexually and still like my vagina is getting punished? Like why me of all people?” Pham said. “I’m just trying to stay pure and then all of a sudden I get this.”

These comments, too, came under fire. “Not Haley Pham making a whole 30 minute video saying to not visit Greece because of their economy and then saying girls who are sexually active deserve a disease more than she, a non sexually active person, does,” one user tweeted.

not haley pham making a whole 30 minute video saying to not visit greece because of their economy and then saying girls who are sexually active deserve a disease more than she, a non sexually active person, does

Pham did not immediately respond to the Daily Dot’s requests for comments.