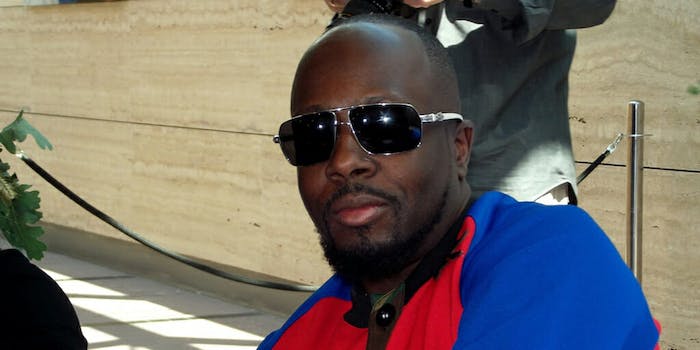 Haiti-born Wyclef Jean raps a message to Trump about immigration

'You need to renew that TPS, too many Haitians are feeling that stress.'

Hip-hop star Wyclef Jean performed at the Little Haiti Cultural Complex in Miami on Saturday, in hopes to raise awareness about the tens of thousands of Haitians facing threats of deportation.

“Donald Trump renew TPS,” Jean rapped. Keeping in beat with his former band the Fugees’ hit “Ready or Not,” he added: “You need to renew that TPS; too many Haitians are feeling that stress.”

Yes he did jump off the stage, over the barricade and into the crowd @LHCCmiami. @Wyclef https://t.co/qkPQlUvYhG #Haiti pic.twitter.com/5uSutB6o7Z

Jean’s activism follows the news that Homeland Security Secretary John F. Kelly will announce Tuesday whether the administration will allow TPS to expire on July 22 or extend it.

The TPS was originally passed in 2010 after Haiti was hit by a disastrous earthquake. The program temporarily protects Haitians living in the U.S. illegally. More than 58,000 Haitians registered for the program, many in South Florida, which has the largest Haitian community in the country, according to the New York Times.

In April, James W. McCament, the acting director of United States Citizenship and Immigration Services, wrote a memo to Kelly recommending the termination of the TPS. He said conditions related to the earthquake “have been largely ameliorated,” according to a copy obtained by the Miami Herald.

Despite McCament’s recommendation, Haiti is still recovering from the earthquake. The country has also dealt with a cholera epidemic that killed 9,000, a long drought, and last year’s Hurricane Matthew, the biggest storm to hit Haiti in 50 years.

Haitian Marleine Bastien told the Miami Herald that she feels encouraged by the exposure Jean gave the issue.

“I know it warmed the heart of thousands of TPS recipients,” she said. “I had a community activist say to me last night: If every musician did what Wyclef did last night, we would be so far ahead in this campaign for TPS renewal.”

Jean isn’t the only individual trying to spread awareness about the TPS extension. The hashtags #TPSforHaiti and #SaveTPS have circulated around Twitter, with many users pleading to President Trump to extend the deadline.

The U.S. is a country of safe harbor for those in need. Don’t send Haitians back to a country ravaged by natural disasters. #TPSforHaiti

The emotional toll of this, whole communities having to prepare for an unsure future #SaveTPS #TPSforHaiti

Citizens who wish to show their support for the extension can sign a petition, created by the National Immigration Law Center.