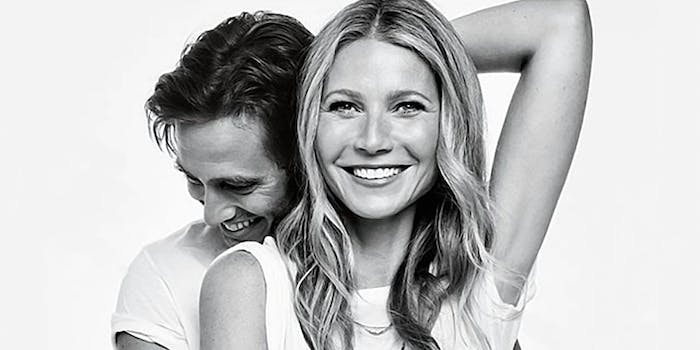 The announcement comes 4 years after her 'conscious uncoupling' from Chris Martin.

After a year of speculation, Gwyneth Paltrow has confirmed her engagement to Glee co-creator Brad Falchuk by adorning the second-ever print issue of Goop magazine, the “lifestyle brand” publication owned by the actress.

Paltrow and her new fiancé donned matching white T-shirts and jeans on the cover of Goop’s new “Sex & Love” issue. Four years after “consciously uncoupling” from ex-husband and Coldplay frontman Chris Martin (with whom she has two children, Apple, 14, and Moses, 12), Paltrow says she’s ready to embrace all of love’s complexities and tie the knot again.

“Personally, at midlife, I have tried to accept how complex romantic love can be,” she says in the issue, which hits shelves Jan. 9. “I have decided to give it a go again, not only because I believe I have found the man I was meant to be with, but because I have accepted the soul-stretching, pattern-breaking opportunities that (terrifyingly) are made possible by intimacy.”

The actress-turned-health guru takes a clearheaded, self-aware approach to marriage—much more so than the $135 coffee enema she’s hawking on Goop’s website, despite explicit warnings from doctors that coffee enemas are “quackery” and “a triumph of ignorance over science.”