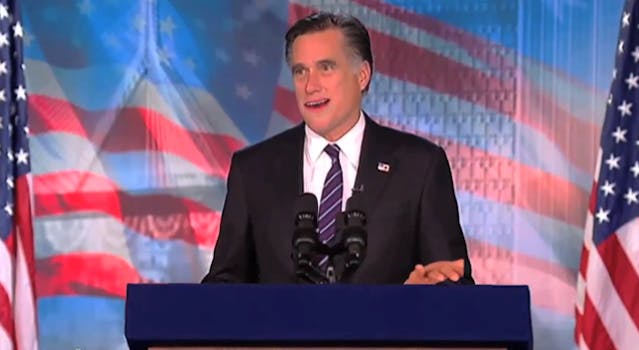 Mitt may have lost, but he's still "filthy rich!"

The former Massachusetts governor had his final swan song courtesy of the Gregory Brothers, whose Auto-tuned treatment of the candidates was a highlight of the debate season.

Addressing a crowd of supporters in Boston, the Gregory Brothers’ parody version of Romney is able to look on the bright side: he may have lost, but h-e-double-hockey-sticks, he’s “still filthy rich.”

He sounds positively giddy as he is able to, for the first time, express that he’s actually happy that he lost in a song that would fit right in a ‘60s musical.

“I never really wanted that low wage ‘president’ job to taint my career. Besides, who on Earth could possibly get on by on $400,000 a year?” Romney sings.

Who needs the presidency when you have tax write-offs and can invest in anything you want overseas?