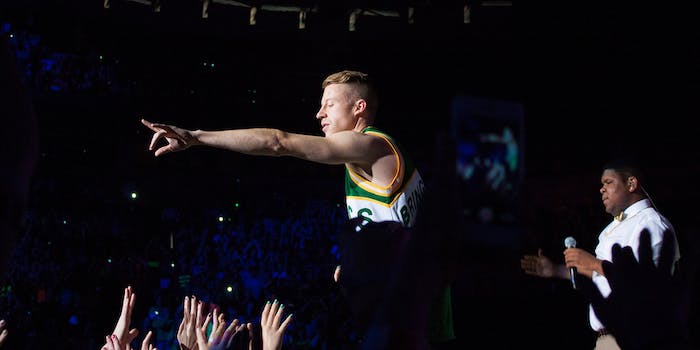 Thirty-four couples will say "I do" to Macklemore & Ryan Lewis's "Same Love."

There are some important nuptials happening on television tonight, and no, we’re not talking about the Bachelor wedding.

Thirty-four couples—of varying race, age, and sexual orientation—will be married on stage during the Grammy Awards. The group ceremony will take place during a performance of Macklemore & Ryan Lewis’s hit song “Same Love,” which has become something of an anthem for those who support marriage equality.

While the moment is expected to be a star-studded and moving tribute to love (Queen Latifah will officiate), not everyone is happy.

That’s because some see the last-minute move to include Madonna as a featured performer as upstaging Mary Lambert. She’s a Seattle musician and LGBT activist who cowrote the song and provides vocals on the original version. (It seems she’ll still be performing, though.)

Also adding to the controversy, of course, are the people who are flat-out against same-sex marriage.

“I expect that people with all kinds of opinions might voice them, and that’s healthy,” Neil Portnow, the president of the National Academy of Recording Arts and Sciences, told the New York Times.

In any case, Madonna has already expressed her thoughts about her role in the imminent love-in.