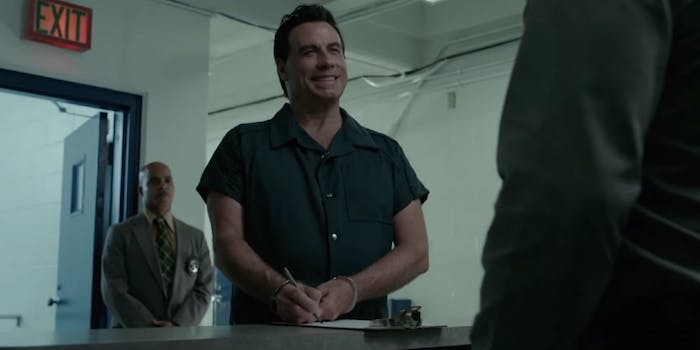 Should you really trust the critics who tell you this movie is really bad?

Movie promotion is a tough sell these days. How do you get eyes on your film, especially if it’s been annihilated by critics on Rotten Tomatoes?

The PR team behind new film Gotti—which stars John Travolta as crime boss John Gotti and was directed by one of the guys from Entourage—has decided the solution is to shit on those critics. The official Twitter account for the film, which currently has a zero percent score on Rotten Tomatoes, posed a very interesting question on Monday night. In the accompanying teaser clip, the viewer is asked: “Who would you trust more? Yourself or a troll behind a keyboard?”

Audiences loved Gotti but critics don’t want you to see it… The question is why??? Trust the people and see it for yourself! pic.twitter.com/K6a9jAO4UH

Further complicating the matter is a somewhat positive audience score on Rotten Tomatoes, which, as of Tuesday, sits just below Incredibles 2. In a post on r/movies—and a Twitter thread from Screen Junkies’ Dan Murrell—a theory is floated that the score has possibly been manipulated. The Reddit post points out that many of the audience reviews come from people who created accounts this month:

I went to take a look at the written reviews on RT and of the first 58 reviewers with an available profile 45 had created their account on June 2018; out of these 45, 32 have only reviewed Gotti, 10 reviewed Gotti and another movie (7 times it was American Animals for some reason) and 3 had more than 3 reviews.

The ratio is off, but is this part of the marketing plan to paint the film, which tanked at the box office and took a Movie Pass investment with it, as more divisive in an era of owns? Another interesting thread: American Animals was also a MoviePass investment.

Okay, I’ll just come out and say it. Some party involved with Gotti artificially manipulated the audience scores and they’re now using it as a marketing strategy. The numbers don’t make sense. Even if that weren’t true, this is a divisive & desperate way to sell a film. https://t.co/Q5jznjNRSx

Dennis Rice, who helmed the film’s marketing, mentioned the score to Deadline: “What is shocking to me is that 80% of audience members on Rotten Tomatoes and 4 of of 5 of them on Fandango liked the film. Clearly critics are out of touch with the people who actually vote with their pocket books. It makes me wonder if the press and critics don’t want a movie to succeed because they incorrectly think we are glorifying John Gotti.”

Rotten Tomatoes also did some owning, tweeting out a handy chart of all of Travolta’s previous splats.

#GottiMovie is John Travolta's 4th film at 0% on the #Tomatometer and 'Battlefield Earth' isn't one of them pic.twitter.com/TXqTG1Oqqh