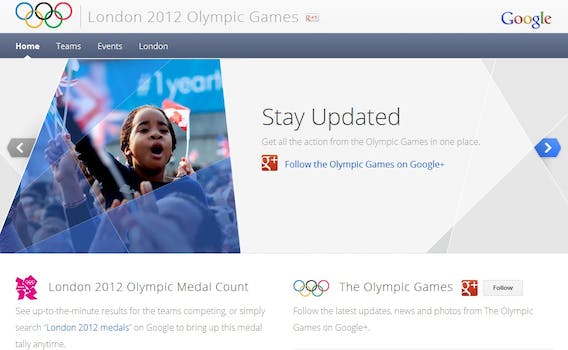 Google launches its own Olympics hub

Facebook and Twitter have already rolled out their dedicated Olympics pages, and now Google is getting into the Games with an impressive, interactive hub for coverage.

We’re spoiled for choice these days when it comes to following the Olympics. There was already blanket television coverage and dedicated space on Facebook and Twitter, and now Google has its own Olympics hub.

The page, available at google.co.uk/olympics, pulls in useful content and information from across the breadth of Google’s services.

To keep up to date with your country’s team, an interactive map shows how many athletes are participating from each nation, which sports they’re competing in, and how many medals they’ve won. Below the map, there’s a list of Olympic teams on Google+, while a Google+ page tracking all the major events is available to view and add to your circles.

Searching for “london 2012 medals” on Google will display a table of all medals awarded to each country during the 16-day event as they’re handed out.

People in 64 countries in Africa and Asia can watch the Games through YouTube, and NBC is using the video-sharing community to power its online coverage. There’s some classic Olympics footage on the Games’s official channel as well, including Usain Bolt’s amazing 100m victory in Beijing:

If you’re looking to find out what events are on when and how you can watch them, have a peek at the hub’s Events page.

Using Street View and Google Earth, you can take a tour of London’s landmarks and see how the city has transformed in the build-up to the 16-day sporting extravaganza.

It’s a fairly impressive starting point for following the Games. Here’s hoping other cool features (like, for instance, being able to track the marathon races in real time on a map) are on the way.