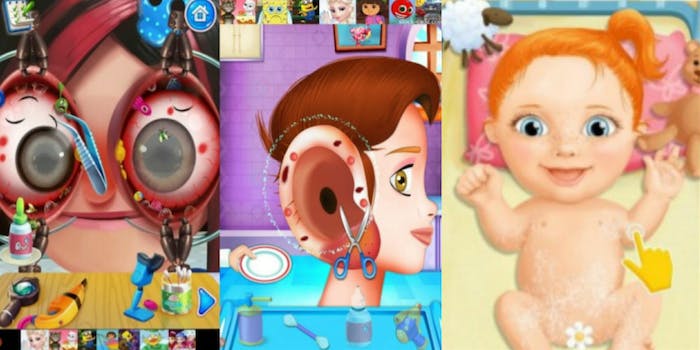 Some apps found to mine and share a phone's personal data.

Plucking eyelashes, oiling up pregnant woman—these are just some of the games found until recently in Google Play’s “Kids” category, BuzzFeed News reports.

This isn’t the first time Google’s received heat for its store’s content. Back in April, a UC Berkeley study found thousands of apps that failed to adhere to the Children’s Online Privacy Protection Act. This federal law protects children under 13 against companies vying for their personal information.

Now the Campaign for a Commercial-Free Childhood, two Democratic lawmakers, and 21 other child advocacy groups have approached the FTC with a scathing review and demands for a federal investigation.

While Google’s policies dictate children’s apps must adhere to both federal laws and the guidelines of its own “Designed for Families” program, the campaign found 84 apps that shared the user’s information with third parties. Several others contained ads for alcohol and gambling, according to the report. Some games like “Crazy Eye Clinic” and “Pregnant Mama Emergency Doctor” featured “dangerous or disturbing content,” imagery that would be more at home in a fetish video.

YouTube has struggled to block similarly bizarre children’s content on its platform, but while it’s vowed to improve, Google hasn’t been as transparent about its efforts. Since Google gets a 30 percent cut of every app bought, as well as any purchases there-in, the campaign argues the company lacks incentive to clean up its act.

“The things that are concerning and problematic, they actually profit off of,” said Josh Golin, the group’s executive director.