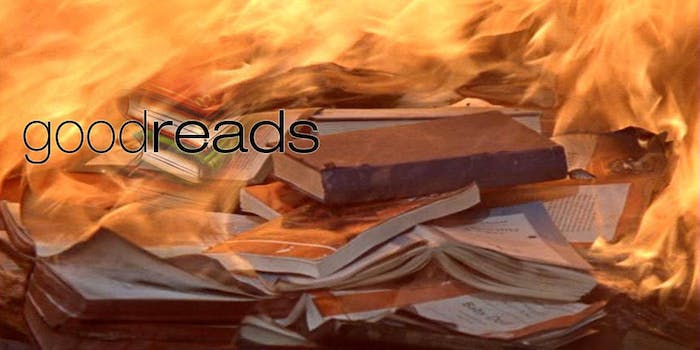 Stay positive, or else: Is Goodreads’ new review policy censorship?

While Goodreads prunes its comments, users fight back by deleting their accounts.

Just in time for Banned Books Week, the Internet’s largest book-review site is hosting a meltdown over a new policy that many of its members feel is a blatant act of censorship.

The problem that Goodreads attempted to solve in its recently announced review policy update was one that has plagued the publishing community and book blogosphere for some time: the issue of authors and reviewers behaving badly. Last year, authors angry at reviewers for leaving negative feedback spawned a campaign to “stop the Goodreads bullies” [STGRB], which in turn has made a habit of harassing and calling out negative reviewers.

The back-and-forth has spiralled out of control. Last month, trolls on Goodreads harassed an author with rape threats before she was even published, prompting her to pull her book from publication altogether. Earlier this month, a writer hired hackers to leave negative feedback on other books as “revenge” upon his “enemies.”

Clearly, Goodreads needed to take a stand. But the stand they took seems to have enraged everyone on the website. While most of their revised review policy is understandable—they note that reviews should be focused on the book and promise to help authors understand what’s not acceptable Goodreads behavior—the kicker for most Goodreaders is the part where staff promises to:

Goodreads kicked this policy change off by deleting reviews and shelves before the announcement was made, which left users confused, and subsequently enraged. For many Goodreaders, being able to discuss an author’s behavior is hugely important, since it can directly affect their opinion of the book. And while creating a negatively titled bookshelf may seem like a passive-aggressive move, it’s a very popular method among Goodreads reviewers to easily share info about a writer whose behavior has turned them off or alienated them from buying books. On her blog, reader Tess Burton explained what all this meant to her as a reader and a book buyer:

On Tumblr, breakraven echoed her:

I mean, excuse me, but sometimes knowing the author has a LOT to do with my opinion of a book. Knowing why they put something in a book, if it was plagiarism, it DOESN’T MATTER if I enjoyed it or not, because they STOLE it. WE SHOULD BE ALLOWED to let other people know about this stuff! … If the author’s behavior impacts my impression of the book, you can be darned sure that I WILL MENTION IT.

And what about those reviews that mention the author in a positive light? I’ll bet they aren’t deleting those. Goodreads is sucking up to the authors now and I hate it. -__-

But many authors don’t like it any more than readers do. “That’s not how you Community, guys,” said author Leah Raedar in an open letter to the website.

Additionally, Goodreads’ decision smacks of side-taking. While reviewers only have Goodreads as their platform for reviewing, authors can and do take grudges offsite. An author can make an angry Facebook or blog post about their Goodreads reviews, naming reviewers by name; but because those incidents occur off of Goodreads, staff can’t exactly ban them for bad behavior. Goodreads’ new policy stance means reviewers on Goodreads have no way to talk about the author or their behavior, or to warn each other that reviewing a book by a certain author might put you in their line of fire. Essentially, Goodreads’ real policy update is: take the drama elsewhere. But that assumes that reviewers have an elsewhere—and while most authors do, most reviewers and readers don’t.

The announcement post has garnered over 65 pages of distraught comments from Goodreaders. Goodreads user Thalia was one of them. “What is not being understood is that we DO report [harassing authors] to Goodreads,” she explained after receiving a reply from Goodreads staff:

[T]hey get banned, and then they take their fight elsewhere. They take it to site where Goodreads cannot take care of it. … Banning them from the site did/does not stop the folks behind STGRB from doxxing readers. It does not stop that certain individual putting bounties on reviewers’ heads and getting hackers to dig up our personal, identifying information. We can’t force them to take it down, and most of the time, the web host doesn’t even care that these sorts of things are being posted. We have no defense.

We WERE able to shelve them as a badly behaving author, we WERE able to explain in comments outside of the review space that this is the lengths they’re willing to go in order to silence your negative review. We were able to warn each other that we could be in danger if we dared to pick up a book from that person.

Goodreads is not all-powerful. We don’t have many ways to protect ourselves from this.

Goodreads has already begun deleting comments and shelves that make even innocuous references to “author behavior,” such as those named “Due to Author.” Goodreads user KarlynP ripped into staff last night, articulating what seems to be the general sentiment from readers that this is not just a review policy update but a major shift on Goodreads’ part away from a “readers first” mentality. KarlynP cites a comment from May that Goodreads’ CEO Otis Chandler made after Amazon bought the website, in which he vows, “we will always err on the side of readers.” Not any more, according to Karlyn and many others:

While nearly all of us fully support the deletion of truly offensive and abusive content, it is becoming quite clear that even innocuous ‘hurts their feelings’ shelf names and reviews are now banned, and the ‘we will always err on the side of readers’ days are now over.

Shelves named ‘due to author’ and ‘STGRB supporter’ [Ed. note: a supporter of the Stop the Goodreads Bullies campaign against reviewers] have been removed, but I fail to see them as offensive. THOUSANDS of your members also fail to see it as such. This is our new standard?

Attempts by Goodreads Customer Care Director Kara Erickson to assuage angry readers just made things worse; after she asserted that Goodreads only looked at how shelves were being used, angry readers demanded to know how the website could possibly be “confident” about the purpose of deleted shelves with names like “icy_hex” and “taa.” The thread, meanwhile, continues to be full of comments from “deleted users” who’ve killed their Goodreads accounts in the days since the post was made. And despite heavy criticism, the site has not restored the reviews and shelves of users who fell privy to this policy before it was officially announced.

UPDATE – @goodreads still refuses to act as a good corporate citizen by restoring member data deleted without prior notice. Unacceptable!

Goodreads users have been fighting back by deleting their accounts, blogging elsewhere about the incident, and by leaving troll reviews, such as this example of a review for Hitler’s Mein Kampf: “The author is such a dick. I’m not even going to read it.” The Tumblr account Censored by Goodreads is compiling examples of responses to the controversy.

But even though the changes look universally unpopular, after four days and thousands of comments, it looks as though the community is unlikely to pressure Goodreads to reconsider its policy. And with the pressure on Goodreads to drive sales to its new flagship, Amazon, it could be that the website’s new motto is a fittingly Orwellian one:

Stay positive, or else.