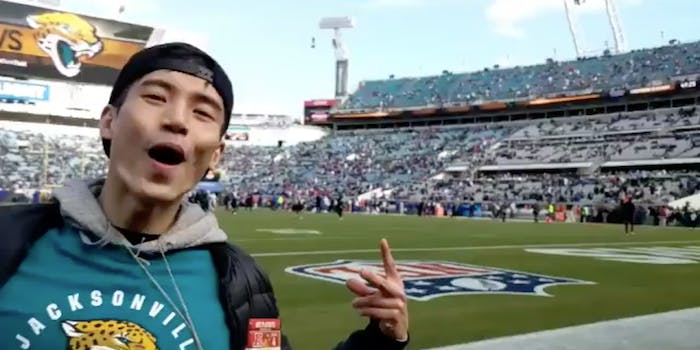 Jason believed in the Jaguars before any of us did.

If there’s one thing you need to know about Jason from NBC’s The Good Place, it’s that the Jacksonville Jaguars are his favorite football team.

The lovable underdog character has spent much of the comedy’s two seasons embodying the kinds of Florida stereotypes you might have picked up on from headlines online. From his career as an “amateur EDM DJ” to his stories about a best friend named Pillboi, Jason is proud of his Jacksonville heritage. But that’s probably never clearer than when he talks about the Jaguars.

The Jags are Florida’s third-most-popular NFL franchise—they finished the 2016 season 3-13 (last place in their division, and second-to-last place in their conference)—but they’re the closest to Jason’s heart. He has a particular soft spot for the player Blake Bortles (it doesn’t hurt that “Bortles!” is such a satisfying name to yell). It’s a recurring joke so silly the Jaguars recently invited actor Manny Jacinto and writer Joe Mande out to a game as a thanks for their solidarity.

So you can imagine the fandom’s collective surprise when the Jags actually… started playing well this season?

We did it, J-town. pic.twitter.com/vmtiERvzNT

— The Good Place is taking it sleazy (@nbcthegoodplace) January 7, 2018

And now, in what’s being called a “stunning upset” over the Steelers Sunday evening, the Jaguars won 45-42, qualifying them for the AFC championship. If the Jags take home that title, it means they’re headed to the Super Bowl. In other words: This is further along in the season than everyone but Jason Mendoza anticipated the team getting.

So the Good Place account celebrated the win with a reel of the show’s best Jacksonville moments to date, as an homage to Jason’s beloved team: