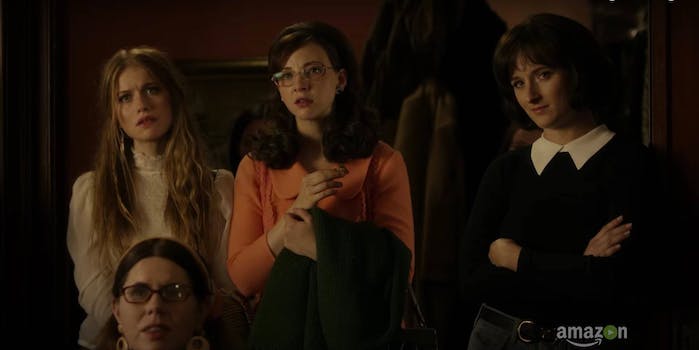 Hell hath no fury like a television cast scorned.

The actors behind the Sony Pictures Television series Good Girls Revolt are using Twitter to mobilize fans after Amazon Studios canceled the show on Dec. 2. The cancellation came just one day after the show’s season two pitch to Amazon, and more than one month after the show’s series premiere on Oct. 28.

Good Girls Revolt is a fictionalized account based on the 1970 lawsuit filed by 46 women against Newsweek in an effort to end the magazine policy of only allowing men to be reporters. Congresswoman Eleanor Holmes Norton, who represented the women in the suit, is depicted in the series, as is writer and filmmaker Nora Ephron.

“Based on data provided to us from Sony, Symphony Advanced Media reported our show was a hit, and we have loyal viewers,” Calvo said. “Eighty percent of people who watched the first few minutes of the pilot stayed until the last minutes of the finale. We had twice Transparent‘s audience…”

In the days following the cancellation, Calvo also told Forbes that, though Amazon doesn’t release its viewership data for original content, it’s downplaying Symphony’s data as a way to “gaslight” about the real figure. She also said Amazon Studios head Roy Price seemed unenthusiastic about the series.

“He’s never been hugely supportive of the show from the start,” Calvo said. “He wasn’t very involved in it. We didn’t hear much from him—what we had heard was just that he wasn’t into it.”

Many of the main actors, including Anna Camp and Joy Bryant, expressed their disbelief for the show’s cancellation on Twitter and Instagram.

To all who supported and enjoyed #GoodGirlsRevolt THANK YOU. That love means everything to all of us involved.

I'm lucky to have been blessed with the huge responsibility of portraying such an extraordinary woman, @EleanorNorton #EleanorHolmesNorton

Regardless of the future of @GoodGirlsRevolt , I am a better person & a better woman because it existed when it did. Thank You.

For all the awesome fans reaching out, Thankyou! I have no clue why Amazon would cancel our hit show just 35 days after its release.

Thanks so much to everyone who watched! And thanks to Tristar/Sony who're continuing to fight for the Good Girls! We hope the isn't the end. https://t.co/mVRPxQxw69

Amazon decided to cancel GGR. Your roars of support elevated me from the darkest election in history & I'll never stop fighting back for us.

.@Amazon I dunno what to tell women, scared of their own president, who ask why you cancelled a hit feminist show 30 days in. What do I say?

With Sony in the process of getting the rights back from Amazon to shop the series elsewhere, Good Girls Revolt stars and showrunner Darlene Hunt are using the hashtag #SaveGoodGirlsRevolt to rally fans in support of finding the show a new home.

If #SaveGoodGirlsRevolt starts trending, Sony will have added ammo for reselling the show to another outlet.

Let's fight for it folks! Use #SaveGoodGirlsRevolt and please feel free to tweet at networks like @netflix @hulu @HBO etc. to pick it up :o) https://t.co/Orp7nQSTcQ

Let's get this trending y'all! Retweet or tweet ur own, but show ya love! #SaveGoodGirlsRevolt #goodgirlsrevolt

Using the hashtag, fans of the show shared their own reasons for wanting to save the series.

#SaveGoodGirlsRevolt Was one of the few shows to actually address women's issues, please help bring it back @HBO @hulu @netflix

.@amazon just curious, how many women were on the team that decided not to renew #goodgirlsrevolt #WrongCall #SaveGoodGirlsRevolt

#SaveGoodGirlsRevolt because right now, today, in Donald Trump's America, we need to shout women's stories more loudly than ever.

Amazon and Sony Pictures did not immediately return requests for comment.