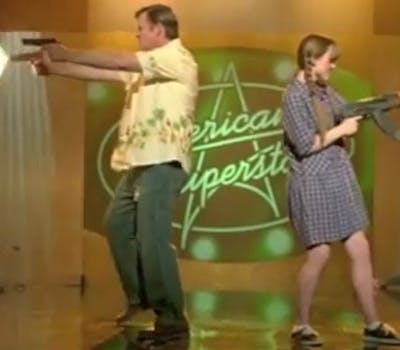 This new dark comedy from Bobcat Goldthwait puts a bullet to the head of pop culture, literally.

Are you ready to watch all the people you despise—the reality TV celebrities, spoiled middle-class teens, and drugged-out rock stars ruining America—take a bullet to the head?

God Bless America, the dark comedy written and directed by Bobcat Goldthwait, thinks so. And the Internet, where footage of these same stars are ridiculed, remixed, and memefied, collectively agrees.

Posted onto YouTube on Jan. 28, the two-minute-plus trailer for the film has collected 350,000 views. In it a man who has a massive brain tumor and little time left to live goes on a murder spree with a teenage girl.

The trailer is no where near Brave’s level of viral spread (seeing 1 million views over one weekend), but for a violent movie critiquing our celebrity culture, its popularity is impressive.

The red band trailer embedded below is somewhat NSFW.

Film School Rejects sets up the trailer by calling modern pop culture “a wasteland of broken people being made famous for little other than the willingness to humiliate themselves.” God Bless America is Goldthwait’s “cathartic expression” for those “good” people viewing modern society as “poisonous” and “creating a society of vain, ignorant, entitled freaks.”

Big Hollywood wondered if God Bless America catches “the cultural zeitgeist” or would ultimately “go down as a colossal failure.”

Judging by the Internet’s reaction, it’s going to be the former.

“The movie﻿ where the people do the thing everyone has been thinking FOREVER” wrote varygoode in a top comment on YouTube Monday night.

“Epic﻿ because its true” commented warghwurgh.

On Reddit, users were equally fanatical about the trailer but quick to point out the impending backlash that the film would receive, particularly from Fox News, which is parodied in the trailer.

“News stations are going to have a field day with this movie.” wrote Crim91 on Reddit.