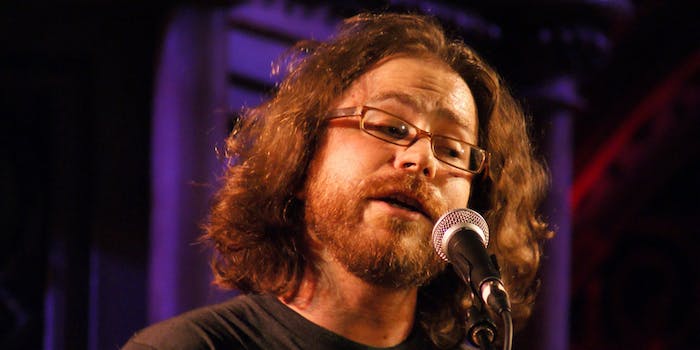 Did “Glee” rip off Jonathan Coulton’s “Baby Got Back” cover?

Fox’s hit show Glee is facing backlash from fans after an Internet musician accused them of ripping off his version of a song he covered.

Jonathan Coulton covered Sir Mix-a-Lot’s “Baby Got Back” on Oct. 15, 2005 as part of his “Thing a Week” project podcast, in which he challenged himself to make a new song every week for a year. The project catapulted Coulton to Internet stardom and some mainstream success.

For his “Baby Got Back” cover, Coulton wrote a new melody and changed a few lyrics:

Now Glee appears to be including a cover of Coulton’s version of “Baby Got Back” in its next episode, set to air on Jan. 24, except there’s only one problem: This is the first time Coulton heard anything about it.

“Hey look, @GLEEonFOX ripped off my cover of Baby Got Back  …  Never even contacted me. Classy,” Coulton tweeted in a message that has since been retweeted nearly 3,500 times.

The two versions of “Baby Got Back” are eerily similar when played simultaneously, as demonstrated by YouTube Doubler. Tumblr user deathtiel combined the two songs in an audio post, and when played, you can hardly tell the difference between Coulton’s version and Glee’s.

Coulton first found the Glee cover through the Glee Wiki, which lists the song as appearing in the episode “Sadie Hawkins Dance,” performed by Adam, a new character on the show.

Upon a listen, Coulton suspected that Glee may have even included some of the same audio from his song—including a duck quack and the words “Jonny C”—although he doesn’t know for sure whether it’s the same audio or even the official Glee cover.

“It’s a cover of a Sir Mix-a-Lot song obviously, but I wrote a new melody for it, which this recording uses,” Coulton wrote on his website. “Back when I released it, I bought the statutory license to distribute my version of this song through Harry Fox. Creative Commons doesn’t come into play because it’s a cover song, and anyway my CC license specifies Non-Commercial.”

Coulton refused to comment further until he found out more information about his legal options.

Kotaku reported that the Glee track may have been in the U.S. iTunes store earlier Friday but is no longer available. However, you can still buy the Glee Cast’s version of “Baby Got Back” through the Swedish iTunes.

This isn’t the first time that Glee has been accused of ripping off other artists. Musician Greg Laswell called out the showrunners for stealing his version of “Girls Just Want to Have Fun” in November 2011, while Pop Culture Brain’s Alex Rabinowitz found that Glee used University of Oregon a cappella group Divisi’s cover of  Usher’s”Yeah” without their full cooperation.