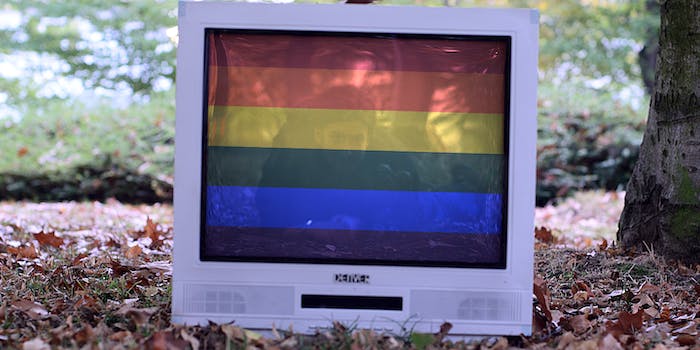 You'll be surprised at the networks doing the best and the worst this year.

LGBT characters are taking over your television.

With an increasing number of appropriate LGBT characters, actors, and content on TV, it looks like queer and trans visibility is here to stay. That’s why GLAAD announced Thursday morning that its just-released 2015 Network Responsibility Index would be its final report on the subject.

GLAAD introduced the NRI in 2006 in a very different television landscape where LGBT characters were few and far between. In 2006, less than 2 percent of all television characters were LGBT. Today, the majority of both cable and broadcast networks devote anywhere from a third to three-quarters of programming hours to LGBT representation.

“GLAAD’s first NRI set a baseline that showed LGBT people were vastly underrepresented,” wrote GLAAD CEO and President Sarah Kate Ellis in her introduction to the 2015 report. “These results were shared not only with the general public but also with the networks themselves in direct conversations that have continued year after year, and our efforts paid off.”

The organization will continue to monitor LGBT representation on television in general through its Where We Are On TV annual report, but the Network Responsibility Index—designed to nudge networks by holding them publicly accountable—is now considered a mission accomplished.

Ellis said the numbers of LGBT television characters and plotlines directly mirrored that past decade’s increasing acceptance and political equality of the community.

“We know that’s not a coincidence. Television has always had a reciprocal relationship with the society watching it—reflecting social attitudes while also shaping them—and that relationship has without a doubt helped the country move closer to full equality and accelerate acceptance for all its citizens,” wrote Ellis in today’s report.

This year’s report shows that LGBT representation on TV is at unprecedented levels. And the network with the highest score in terms of LGBT characters and storylines might surprise you: ABC Family. It scored higher than any network in the history of GLAAD’s network tracking, with an incredible 74 percent of its original programming including what GLAAD calls “LGBT impressions.” The network scored high for diversity in its LGBT representation as well, with 79 percent lesbian characters, 49 percent people of color, and a transgender character played by a trans actor. Whoever is making the programming decisions at ABC Family, the LGBT community applauds you.

Fox scored highest among the broadcast options due mostly to the show Empire, which led to 36 percent of the network’s LGBT impressions being made by people of color.

The overall loser among both cable and broadcast networks was  the History channel. Across 362.5 hours of original programming scanned by GLAAD, not a single LGBT impression appeared—which, the report noted, also happened last year. According to the History channel, it seems, LGBT people simply don’t exist.

Overall, however, GLAAD was impressed enough by the rapid transformation of television’s LGBT representation over the past decade to simply hang up the report after this year. That’s a notable victory for LGBT culture.