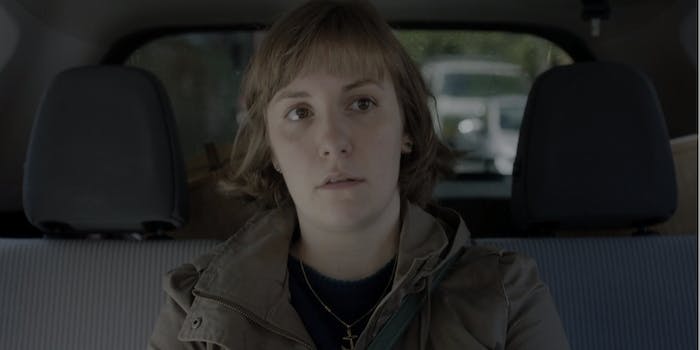 Is ‘Girls’ finally growing up?

Season 4 of Girls premiered last night, and while the Internet might lead you to believe the TL;DR was a NSFW scene featuring Marnie’s (Allison Williams) behind and her songwriter lover’s face, the full episode proved to be more about growing up, owning your choices, and having the courage to be the person you want to be.

The opening scene finds Hannah (Lena Dunham) back in a familiar place: out to dinner with her parents. The show’s pilot opened with a scene in which her parents delivered the devastating news that they would no longer be giving her money. But here, the dinner is celebratory. Hannah is embarking on a journey to grad school, and her father (Peter Scolari) lovingly but awkwardly toasts, “Slow to bloom but oh, how beautiful the blossom.”

It’s a bit of sentimental dad humor, but it also hints at a larger theme. Whereas seasons 2 and 3 both opened on Hannah asleep, spooning different loved ones, here we find her wide-eyed and fully awake.

She thanks her parents for their generosity and support, ships her belongings to grad school in advance, and, in the moving final scene, she quietly contemplates what’s next while her parents bicker in the car that will take her to her future life.

Hannah, who formerly stormed out of promising jobs and threw drug-addled tantrums on her parents’ hotel room floor, is at her sentimental, aspirational best. She wants it all and wants to keep it all, but rather than fussing over the inherent contradictions in her longings, she embraces what she’s known, says her farewells, and moves forward with surprising grace.

The other characters are fighting their own battles towards adulthood, with varying degrees of success. Adam (Adam Driver), Hannah’s boyfriend, struggles with the self-effacing challenges of seeking work as an actor and resents the work he does find. When he appears in a comically heavy-handed ad for antidepressants, he wallows in regret. Hannah is the voice of reason. “People have to work,” she tells him. “You took a job. It’s fine!”

Meanwhile, Marnie is still engrossed in an affair with her songwriting partner. During the already infamous anilingus scene, he tells her, “I love that.” Marnie misguidedly replies, “I love you, too.” She is incapable of handling minor heckling from a child at a “jazz brunch,” exits her performance in tears, and Elijah (Andrew Rannells) wisely urges her to channel Judy Garland or Lady Gaga and “stop giving a fuck” when she’s on stage, in spite of his own inability to stop caring about an irksome acquaintance he encounters at the brunch.

Aggressively free-spirited Jessa (Jemima Kirke) is knocked down to earth when she encounters her employer Bibi’s daughter Ricky (Natasha Lyonne). Ricky gives Jessa a hilariously self-righteous tongue-lashing for aiding Bibi in a failed assisted suicide attempt in last season’s finale: “Every time I meet someone five or more years younger than me they’re a complete asshole.”

Tender-hearted Shoshanna (Zosia Mamet) faces the void after graduating college. Her parents are obliviously unaware of her preferences and needs. Shoshanna, however, is bravely aware of her own choices and past errors. She seeks out Ray at the jazz brunch and gives him a heartfelt apology for any emotional manipulation he endured on her account in the previous season. The two embrace and the forgiveness feels transcendent.

The most entertaining bit of the episode might be Marnie’s mom (Rita Wilson), who greets Elijah with a “She bangs, she bangs!” and totes a brass knuckle iPhone case. Amidst a gaggle of girls aspiring to be women, she shines as a lady who just wants to have fun. Her attempts to be on trend comically straddle the line between laughable and laudable.

Of all the seasons of Girls so far, season 4’s premiere seems the most clear-eyed and truthful. In past seasons, the girls, though likable, were easy to pity and easier to critique. They were often selfish and petty and wore blinders to their flaws. Here, they feel like people we might actually want to root for.

Before Hannah leaves with her parents, Marnie arrives with coffees. Hannah is surprised to see her but Marnie wouldn’t have it otherwise. “You didn’t think I was going to let you leave without saying goodbye, did you?” The two sit as they struggle to shut a suitcase and fall into an embrace. It’s a tender moment and it captures a feeling that pervades the episode.