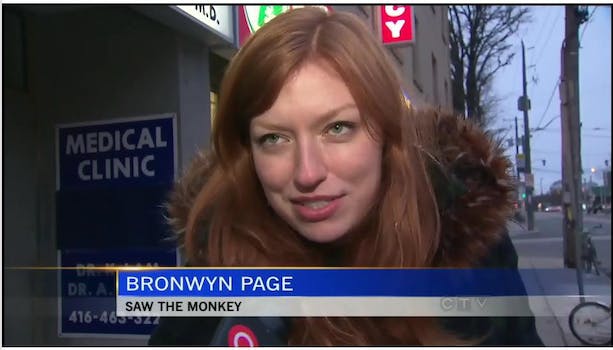 Can this girl ride the IKEA Monkey’s coattails to online fame?

A monkey in an expensive coat became Internet famous after running around a Toronto IKEA store. Can a girl who saw the monkey get famous, too?

Have monkeys replaced cats as the key to Internet fame? Bronwyn Page hopes so.

Page was one of many shoppers interviewed on Dec. 9 after she spotted the “IKEA monkey,” a monkey that was wearing a stylish winter coat in a Toronto IKEA store. Photos and videos of the monkey spread around the Internet, earning the animal instant meme status. The monkey, whose name is “Darwin,” was eventually revealed as the illegal pet of Toronto resident Yasmin Nakhuda. He currently has his own Twitter feed and plenty of overnight Reddit notoriety.

Now, Page herself is attempting to cash in on some of that fame as “the girl who saw the monkey.”

Page also participated in a Reddit IAmA on Dec. 12, entitled “I am the girl who saw the monkey. AMA,” receiving several tongue-in-cheek questions from redditors.

What did you see? (slocki)

“I saw a small monkey wearing a shearling coat running all over the Ikea parking lot scared and screaming!”

Do people recognize you on the street? How are you dealing with the fame? (lawlshane)

“Not one person has recognized me on the street but i suppose it will happen eventually. i don’t feel famous because my life is generally the same.”

Are you considering writing a book about your encounter with the monkey and your new found rise to fame? I’d buy that book! (adrianarcher)

“haha we’ll have to see how long it lasts and if anything exciting comes out of it.”

Of course, Page also had to answer a variant of Reddit’s most popular AMA question: “Would you rather fight 10 monkey-sized horses, or 1 horse-sized monkey?”

“Great question! I think monkeys are scarier than horses and a horse-sized monkey would be really scary,” she wrote, “I’d have to say 10 monkey-sized horses.”

She also revealed in the thread that she is not the person behind the @ikeamonkey Twitter account.

The response to Page’s attempts at securing Internet fame has been slow. Her Twitter feed has only 494 followers while the @IKEAmonkey account has over 6,500. Similarly, while her Facebook fan page only has 57 likes, a fan page created for the monkey has over 2,400.

Additionally, her IAmA only received 5 questions, and a paltry 22 comments in total (including Page’s responses).

Perhaps she should think of investing in her own shearling coat. After all, it worked for the monkey.