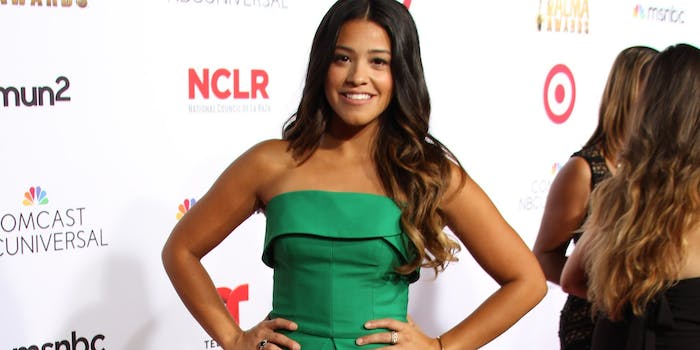 Have the tissues at hand.

While actress Gina Rodriguez might have been nominated for the laughs she delivered as star of CW’s Jane the Virgin, the first-time Golden Globe nominee decided to exchange the jokes for tears with a touching acceptance speech.

Once the winner for Best Actress in a TV Comedy or Musical finally made it to the podium after a long walk from the back of the room, the 30-year-old actress caused the crowd to well up.

After thanking a slew of executives, producers, and directors, Rodriguez took the time to get personal, thanking her parents for encouraging her “to never stop dreaming.” To be sure, she also got her fair share of flak on Twitter for starting with “Thank you, God, for making me an artist.”

But perhaps the most touching moment of the speech came when the Jane star choose to acknowledge her roots and what the award means to her culture. “This award is so much more than myself,” Rodriguez began. “It represents a culture that wants to see themselves as heroes.”

I never felt this celebrated when I was a virgin. #GoldenGIobes

Damb, next year can @HereIsGina get a table inside the globes? #JaneTheVirgin

OK Jane the Virgin has gotta be the biggest shock of the night. She was seated in the ladies room. #goldenglobes #etnow

Jane the Virgin's speech just made me cry a little. #GoldenGIobes

And her closing line had us all a little choked up. Best part of all? She totally called it.

Last year @HereIsGina told me "I can and I will" and now she has http://t.co/TgIcKad52j #GoldenGIobes