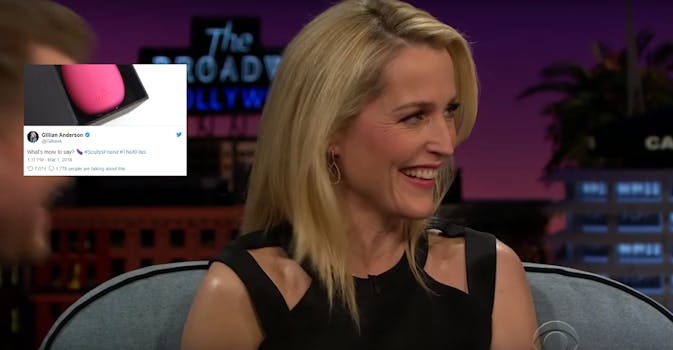 The Mimi is out there.

Gillian Anderson on Thursday turned heads when the X-Files star tweeted about her, um, personal massager. “What’s more to say?” the 49-year-old Chicago-born star wrote, next to an eggplant emoji. But she’s not just being openly sex-positive, the tweet was also a smartly calculated tie-in to a recent episode of the rebooted sci-fi series.

Fans on Twitter were shocked and delighted by Anderson’s candor.

When we were in preproduction and were working on props, we had certain vibrators that were “cleared.” Prime-time vibrators, I guess! And we do call it the “personal massager” in the script. High-level stuff. But that was motivated by an article that said something about the fact that the personal massagers at, I think it was Brookstone, were collecting your personal data. So all the technology talks to each other, and it is all technology that has been reported, at one time or another, to be collecting your personal data. It all knows about you.

Anderson’s horniness, thus, serves as a valuable reminder that all of our technology is privy to our most intimate habits.