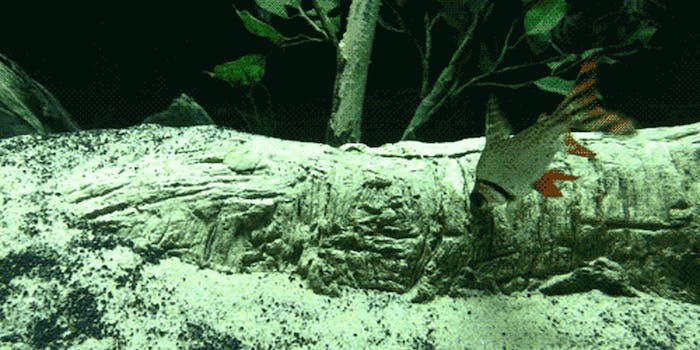 These GIFs swim on your page

When these artists see a great site, they don't just take pictures. They make them move.

When visiting an aquarium, you will likely see a lot of fish and sea creatures.

But if you’re the guys from Mr. Gif, the aquarium is an animators playground ripe with opportunity.

Mr. Gif is a group of three graphic designers from New York and New Jersey. During the day, Seyran Dalipovski, Mark Portillo, and Jimmy Repeat (not his real last name) spend their days working at MTV Geek and Complex Magazine and their nights creating knee-slapping, seizure inducing, GIFs (short for graphics interchange format).

Many of their GIFs are topical (damage from Hurricane Irene, celebrating the release of Kanye West and Jay-Z’s “The Throne”) while others are quirky (New York City rat, finger going through a hand) and spur of the moment.

For example, last weekend the guys took a trip to the New York Aquarium and created more than two dozen GIFs using their iPhones.

A GIF is a 24-year-old image format that allows people to create animations using photographs or illustrations. They can be stand-alone pictures, or as they are in this case, small animated files.

“Any time we’re at a concert or we’re just out and about in the city, I don’t even look at it as taking a picture anymore,” Portillo said. “It’s sorta like, how can I make a GIF out of this? We’re adding that little bit of adventure to it.”

And half of the adventure is bouncing ideas off one another, Portillo said.

Since being founded in March, the guys have used Facebook to share GIF ideas and image files. And if the idea well is dry, they turn to Tumblr for inspiration.

“The thing about the Internet is it’s like finding a diamond in the rough. When somebody is producing quality stuff over and over, you got to follow those people because they’re on another level,” said Repeat, who admires the work of Max Capacity, Gustaf Mantel, and Diego. “The whole community is about sharing your work. Nobody is greedy because everyone is sharing. There’s no money in it.”

Most of Mr. Gif’s animations have collected dozens of Tumblr reblogs and likes, while others have gotten the guys into hot water.

An 8-bit animated GIF of a box of Chinese food opening up and releasing a cloud shaped like Hello Kitty did not endear Repeat to his Asian girlfriend.

“My girlfriend was kinda angry about that one,” said Repeat. “She called me racist for that.”

For now, the guys crank out a GIF per week and are working on a comic series based around an animation of a boy walking in the rain.

While they’d all like to quit their day jobs and create GIFs for a living, they’re content watching their work get retweeted by celebrities like clothing designer Mark Ecko and finding new artists to admire.

“It’s just about enjoying ourselves,” Dalipovski said. “It’s not really work. It’s just fun to do it.”

Check out the GIF the guys made for the Daily Dot.