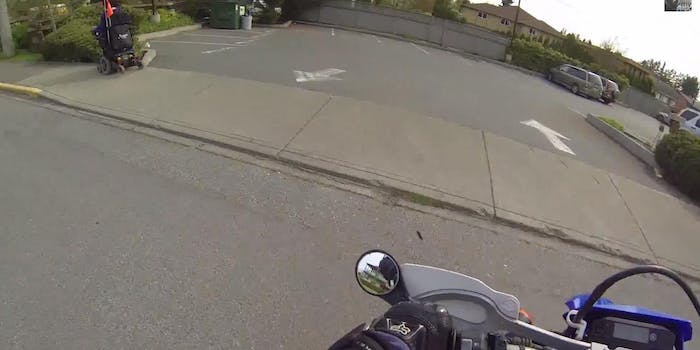 This Canadian just redefined the drive-by.

While driving down the streets of Victoria, Canada, in May, vlogger Kim Faganello saw a woman across the street who had gotten her wheelchair stuck in some brush off the sidewalk. Instead of driving right past her, Faganello, 45, turned around, parked his bike, and helped the woman on her way.

The GIF was made using a video Faganello created as part of Ride Victoria, a year-long project in which he wears a camera strapped to his motorcycle helmet.

“[The video] has been sitting in a folder on my computer labeled ‘unused video,'” Faganello told the Daily Dot. “On August 9 I did not have a motovlog ready to upload, so I went through the unused video folder and found this short clip. It was an easy clip to use because it required very little editing and a little text.”

The video was a success on YouTube, collected more than 300,000 views and reaching Reddit’s r/videos community, where it collected 2,216 comments Monday.

“I had no idea that it would go so big,” Faganello said. “I am quite astonished.”