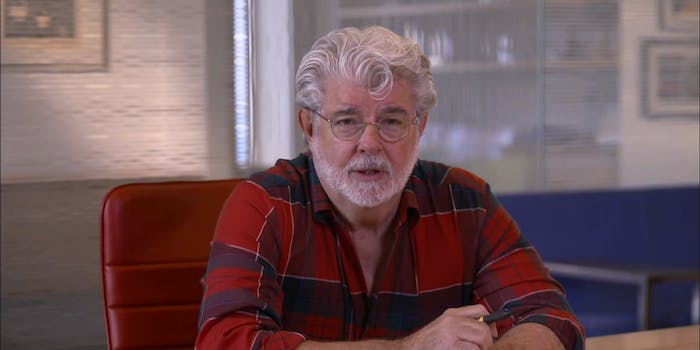 Now we know why George Lucas will be doing with all that free time away from 'Star Wars.'

Fox News is getting the recognition it deserves from liberal Hollywood after its characteristically balanced, restrained reporting on the unrest in Ferguson, Mo.

Although Fox almost always rushes to judgment, Jon Stewart offered his congratulations to the “whale of a network” anyway. He might have compared Fox News to an actual 18-year-old for its massive ego and tendency to “spend 24 hours a day jerking yourself off,” but in the end, he conceded that Fox’s anchors were right: they got something right and they should be praised for it.

Good thing Star Wars creator George Lucas isn’t doing all that much lately. Jon Stewart got him to speak for all of Hollywood by promising that he wouldn’t make another movie unless it was full of patriotism in a galaxy far, far way. It was Stewart and Lucas’ way of showing Fox their appreciation—but of course, they did it as only The Daily Show could.

Lucas’ new, Fox-News-approved films could be terrible, but they’d still be hits at the box office. And The Clinton Menace does have a nice ring to it.