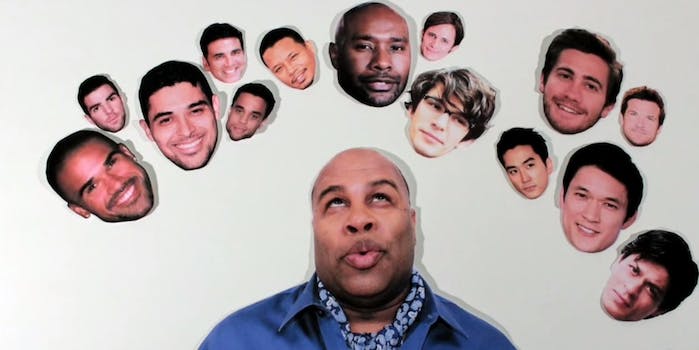 A misguided attempt to do the right thing.

The easiest comparison is not always the correct one, and this new webseries just learned that the hard way.

According to the press release for Gemma & the Bear, the webseries is a “modern, humorous twist on Jekyll and Hyde.” Now this is quite possibly a throwaway line by a person who needed something snappier than “dissociative identity disorder,” but here’s a refresher on Robert Louis Stevenson’s novella: Jekyll, troubled by undefined “irregularities” of character and the threat they pose to his respectable, public persona creates a separate, confined vessel for these desires. This alternate personality, Hyde, is murderous, psychopathic, and possessed of such evil that it physically manifests itself in his deformity and decay.

So when you find that in Gemma & the Bear Gemma (Eevin Hartsough) is a nervous but amiable white women who regularly sees a psychiatrist, and her creation, Bear (Kevin R. Free), is a burly, black, gay man, there is the possibility—with Dr. Jekyll and his horrifying black mirror fresh in our minds—of seeing the relationship as problematic. Bear perhaps isn’t just the coping mechanism that appears when she falls asleep to sort out her problems, but he is something that she has consciously expelled from her own body because she thinks that it will make her regimented, conservative life easier.

When it is Jekyll doing this, we can understand—the traits that he loses are hateful, even if he is separating himself from them for the sake of professional prudence and indulgence. But when what churns out of Gemma is someone from an already marginalized group, it is troubling. What is the message we are supposed to take from this? That it’s better out than in? That we should only vent these still somewhat socially unpalatable feelings at night, so that they won’t cloud our days?

It doesn’t have to be like this. The two characters could easily exist simultaneously, and the humorous, incongruity would remain—but a conscious choice has been made to have a central character who is in therapy and has a history of personality dissociation. And it is a shame for such a perky-looking series; the morning ritual sequence which opens the first episode is a brisk, effective character introduction. But it is all stymied by a ham-fisted approximation, played for laughs, of a complex and misunderstood condition of the mind.

It’s not as if Gemma & the Bear is made for the wrong reasons, to lampoon the bear community or make cheap gay jokes. But those they claim the series is made for—“The Questioning, the folks who are not easily defined by gender, sexual, or binary labels”—are done a disservice. These are the people that may have a Bear inside of them and are uncertain of how to proceed. These are folks who will watch this series and keep their true self repressed.

Screengrab via Gemma and the Bear!/YouTube