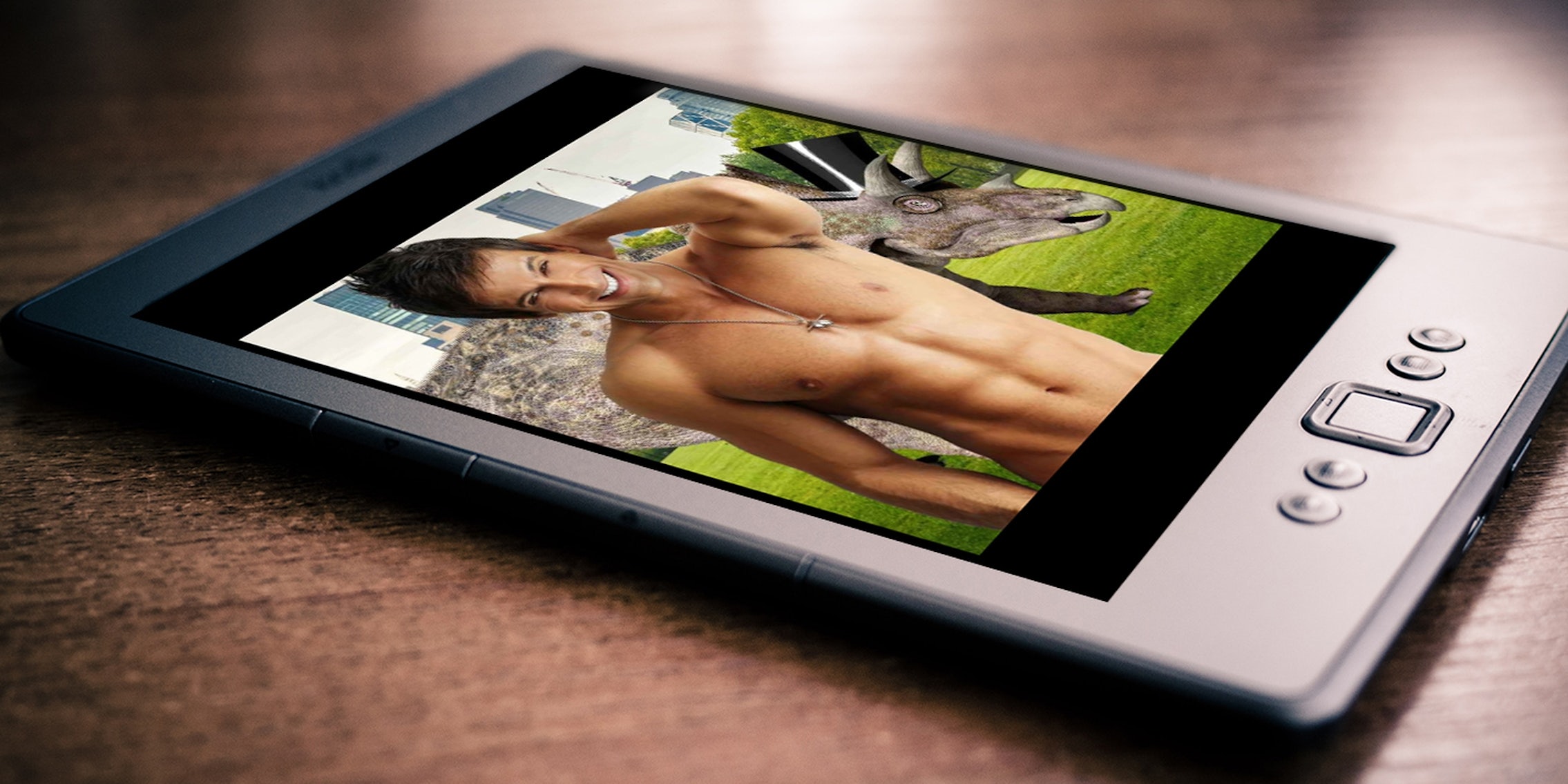 Everything you need to know about gay dinosaur erotica

Is 'My Billionaire Triceratops' the self-publishing wave of the future? Or will it soon become extinct?

If you’ve ever imagined sex with a prehistoric creature, we’ve found the ebook series for you: gay dinosaur erotica.

Niche erotica is a burgeoning market, ripe for the e-publishing revolution. Any kink, fetish, or fantasy can easily find its way to market, from werehedgehogs to Santa to, yes, man-on-dino love. Author Chuck Tingle has written the definitive series to date, and we dove in to his authoritative work, My Billionaire Triceratops Craves Gay Ass, to see exactly what the future of dinosaur erotica will look like.

The story is told in first-person from the perspective of Jeremy, who receives a surprise one day when his former pet triceratops, Oliver, gives him a call. For the past four years, Oliver has been working at a burlesque review. This doesn’t seem like an ideal profession for a triceratops, given that he walks on four legs, but Tingle wants us to know from the outset that Oliver has the anatomy of a dinosaur:

“Everything okay?” Oliver’s voice asks from the other end of the line, knocking me back into reality. “Sorry, it’s kinda hard to hold the phone up with my claws.”

I recognize that voice immediate [sic] and sit straight up. It’s been years, but it’d [sic] know that deep dinosaur tone anywhere.

In most other respects, however, Oliver looks like a man, albeit an exceptionally well-hung man. This is a bit confusing, as he’s never described as a shapeshifter, another popular subgenre of ebook erotica. We just know that he has “tiny triceratops arm[s]” and displays “old school Jurassic chivalry,” whatever that means.

Anyway, after Jeremy gets the phone call from Oliver, they meet up to have dinner and catch up. Most of the 4,500-word book consists of their boring dinner chatter, including a totally unnecessary description of Jeremy’s job editing commercials. It takes 50 percent of the short story for them to even kiss.

At one point, however, Jeremy and Oliver do answer one of the most pressing questions the reader has about man-on-dinosaur love: How these relationships work, and how the rest of the humans at the restaurant see them.

“You know, half the people in here probably think we’re on a date, anyway. Some rich old triceratops with a hot piece of human arm candy.”

I glance around the restaurant and suddenly realize he’s probably right. As taboo as dinosaur human relationships are, they’re still not entirely unheard of, especially here in the big city.

Finally, they leave the restaurant and move on to the hot dino sex. During foreplay, we’re once again reminded of Oliver’s dino characteristics.

Oliver’s scales feel rough but pleasant against my face, a reminder of his beastly dominance as he takes my hands and pushes them back above my head.

I rub my fingers across Oliver’s toned abs, even more impressive than the last time I saw them on our family vacation to Greece.*

“You’ve been working out.” I manage to say through the flurry of kisses.

From this angle I can see his incredible body, toned and muscular due to a rigid dance routine that could only be accomplished by the most disciplined of prehistoric creatures.

*Nowhere else is this trip to Greece discussed in the book.

There is a solid amount of dino dirty talk as they get down to business.

Oliver shakes his head in mock disappointment. “What are we going to do with you? Such a nasty little human twink, you need a real dinosaur to show you how to fuck.”

When they finally have sex, the story has the most unsatisfactory description of an orgasm possibly ever put down in words.

He feels incredible inside of me, now a seasoned gay lover who knows exactly where to thrust within a man. I can feel a prostate orgasm slowly creeping its way across my body, puling inside of me with more and more power until it finally explodes across me in a sensual wave.

In case you’re wondering what the anatomically correct term for a dinosaur penis is, Jeremy refers to it as a “triceracock.”

“Double penetration? I’ve never done that before.” I admit.
“Well then who better to teach you then your favorite billionaire pet?” Oliver offers.

Tingle is a neophyte writer, and has only been publishing on Amazon since December 2014. But he still has six more works for sale on the site, most of which focus on dinosaurs and mythical creatures like unicorns and Bigfoot. Such titles include My Ass Is Haunted by the Gay Unicorn Colonel, Pounded by President Bigfoot, and Pounded by the Gay Unicorn Football Squad.

He’s also a Taylor Swift fan, if a recent sweet to the musician is any indication:

@taylorswift13 please follow# back my son #is a huge fan

So far Tingle doesn’t have any reader reviews of his work, but his bio is in itself a work of art.