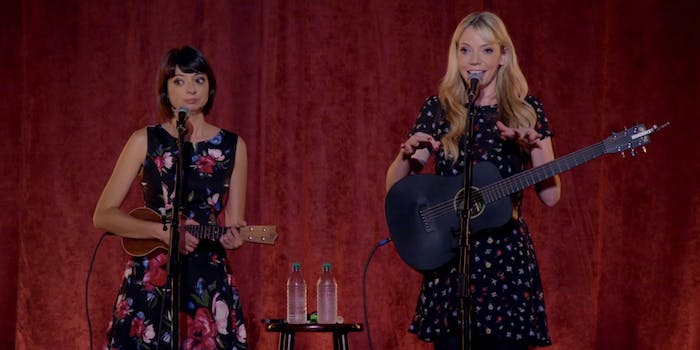 From YouTube to comedy special, Garfunkel and Oates do things their way.

Trying to be Special follows up Elliott Morgan and Bianca Del Rio’s Vimeo projects, as the platform readies its next round of original content. It finds the duo—made up of Kate Micucci and Riki Lindhome—performing for an audience in Seattle to try to raise money for a special, complete with an oversized telethon thermometer to measure their “success.” Comedian Anthony Jeselnik introduces the two, playing a heightened version of his onstage persona.

“Are you guys big fans of Garfunkel and Oates or just the same song 100 times?” he asks by way introduction.

“Our lives are amazing!” she enthuses.

The hour-long Special sticks to this theme: Women of a certain age facing the expectations or uncertainty of their lives, their bodies. The first song, longtime favorite “Pregnant Women Are Smug,” sets the tone, but there’s been a subtle shift in their material. Elsewhere, they consider careers and creative pursuits above romantic entanglements. “I didn’t give up my dreams for a man because here we are,” Micucci deadpans.

By phone, Micucci explains that they’re at a place where they’re legitimately excited about what they’re doing professionally. One of the newer songs in the special explores how Lindhome froze her eggs, and the two sing a lullaby about a theoretical “frozen egg baby.” Inspired by her musical partner, Micucci also just froze her eggs. It’s something a lot of women are forced to contemplate.

“It’s kind of cool that we can talk about it, in a way, and also sing about it,” she says.

Micucci relates that Vimeo gave them the freedom to make the special how they wanted, and that obviously includes songs about ass-fucking and egg-freezing. “We really wanted to capture the show that we’ve been touring with for so long,” she explains.

Garfunkel and Oates’s videos found a sweet spot on YouTube. Back in 2008, it was still more of a platform for sharing clips, and many of their early videos were filmed in a living room with one static camera, as Lindome and Micucci sit on a couch and sing short, made-to-share songs about gay marriage and women accidentally having orgasms.

Micucci says YouTube pushed them to pursue what they were doing more seriously, after the song “Fuck You” started getting clicks in 2009. Word of mouth got them fans and more views. It’s those organic success stories that are so hard to replicate—let alone sustain—now. Micucci’s appearance in the TV show Scrubs also brought more attention to the group.

“I don’t think Garfunkel and Oates would exist without YouTube,” she says.

Eventually they got their own IFC show, but it was canceled last year after one season. They kept working: Micucci stars in Mike Birbiglia’s upcoming film Don’t Think Twice, and Lindhome is filming the next season of Comedy Central’s Another Period. They released their latest album, Secretions, last fall.

Garfunkel and Oates are a Swiss Army knife, at a time when artists often have to be many things to stay afloat. This special is just one of the blades. And by the end of their meta journey, we see just how soul-sucking making a special—or any art, really—can be. But they did it their way.