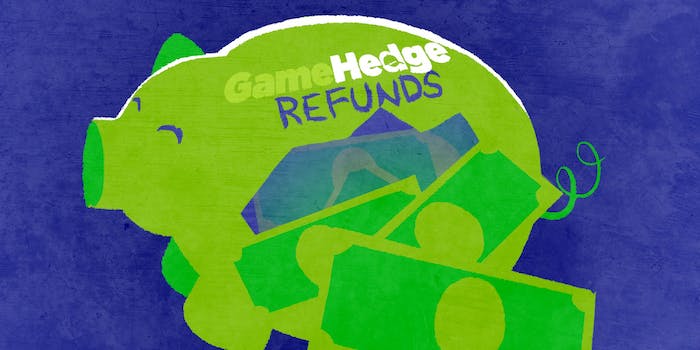 Warren Friss has seen great Super Bowl games from the stands. He’s seen inspiring World Series victories while cheering from the seats. He’s attended countless games in his life, and quite a few of them have been fantastic events to watch—well worth whatever he spent on his ticket.

And then there are games like the Mets-Nationals contest a few weeks ago when New York star Matt Harvey was scheduled to face Washington’s Stephen Strasburg, one of the best pitchers in the game. It was a matchup of two excellent pitchers, and the game should have been a grand slam. Instead, the Nationals scored nine runs in the first three innings, and the game basically was over one-third of the way through the contest.

Friss and his buddies had spent $400 on tickets, and they had to fight oodles of traffic on their way into the game. They got to their seats in the bottom of the first inning. A few minutes later, the game was no longer in doubt.

“We saw about 20 minutes of a game,” Friss tells the Daily Dot. “It was like, ‘What happened here? What did we pay for?’ We walked out of the stadium, and they say, ‘Thanks for coming, drive home safely, we’ll see you tomorrow.’ But the fan gets nothing.”

So, Friss has decided to do something about it. On Friday, Friss launched GameHedge.com, a secondary-market ticket site that will give you back half your money if the game you attend ends up sucking. It’s an idea he’s thought about for the past couple years—he said he was inspired by a Mets-Yankees game from a few years ago that got out of hand midway through the contest, and afterward, he realized he only saw what amounted to half of a game—and for the past year, he’s been serious about getting this website off the ground.

Friss has a love of sports—he’s an attorney, but he also spent many years working for the Topps baseball card company—and he has a love of sports fans. Probably because that’s exactly what he is. He doesn’t like feeling that he’s been ripped off because a game was bad.

“People are disappointed when they leave a bad game. They just haven’t thought that maybe they should get [compensated] for their trouble,” he said. “I’m a big Mets fan, and the thought of paying $500 for a ticket and seeing a bad game, that went into my thinking.”

Buying tickets to a game—or, really, to any kind of entertainment event—has always been buyer beware, of course. Spend $1,500 for a ticket to the big heavyweight title fight, and it ends in a first-round knockout? Too bad. Drop a bunch of money on a Patriots game and Tom Brady is suspended? Tough luck. Spend $1,000 for a Hamilton ticket, and Lin-Manuel Miranda catches a cold and misses the show? Nobody will give you a refund.

Friss knows all this. He just doesn’t care.

He figures the margins for a secondary ticket site are loose enough that he can afford to give back a decent amount of 50 percent reimbursements and still turn a tidy profit. You won’t find what GameHedge terms the “Good Game Guarantee” anywhere else.

“We feel like our product is different from all the others,” Friss said. “And the market is growing dramatically. More and more people are buying tickets on the secondary market. There’s really not a good reason to buy a ticket a month in advance. The ticket-buying experience online is incredibly easy. When I was a kid, you had to call or write in. Now, you buy a ticket on GameHedge in a minute. You can buy them on your way to the game.”

For a fan to get a refund, the home team in the baseball game has to lose by five or more runs. If it’s an NBA or NFL game, the final deficit has to be larger than 15 points (Friss isn’t sure yet about hockey). If that’s the case, GameHedge sends you an email with a link that allows you to be reimbursed for 50 percent of the cost of your ticket. It goes directly back on your credit card.

And, presumably, you walk away a happy customer.

Unless, perhaps, you’re a Phillies fan.

Like I said earlier, @gamehedge is MADE for Phillies’ fans. pic.twitter.com/Kf7zVBgdHP

But will this venture be profitable for GameHedge? As CNBC notes, the site has to have the ability to get enough second-hand tickets, and it’s unclear whether it can make itself a known entity in a relatively crowded marketplace.

Either way, Friss has confidence in the future of his site.

“After going to several bad games, it struck me,” Friss said. “How you feel about the experience is so much based on how your team does, but you pay the same thing no matter what. If you went to a five-star restaurant and something went wrong—the food was cold, maybe—the restaurant would do something to make it right. With sports, that doesn’t happen. It felt like somebody had to do something to stand behind the fans.”