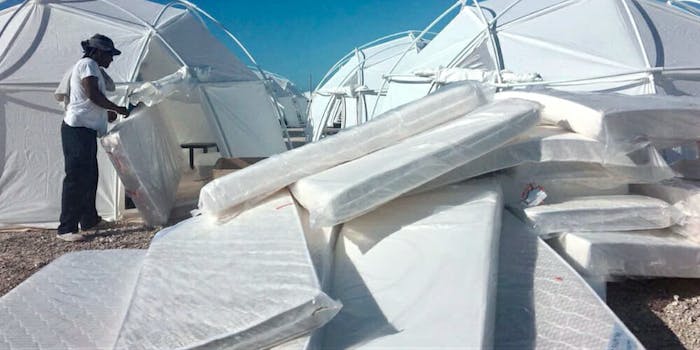 They're set for the two-year anniversary of the catastrophic event.

One Fyre Festival LARP is coming to Hamtramck Island in Detroit, Michigan. Another LARP will be held at Auditorium Shores in Austin, Texas. Both events will take place on April 28 to commemorate the two-year anniversary of the supposed opulent festival that turned into a barbaric free-for-all.

Austin LARP creator and comedian Matthew Stoner told the Daily Dot that from the moment he saw the Facebook page for the Detroit event, he knew he had to bring the concept to his city. Stoner was also inspired by the real-life coffee shop parody “Dumb Starbucks.”

“Truthfully, I started it as a joke, but the more I talked to people the more I realized that people want to do it for real, which makes me eminently happy and joyful,” Stoner said. “People just want to experience this in a cultural guise that they think is funny.”

Stoner and his friends, who he is now calling “producers,” don’t have everything planned yet. So far, their only solid agenda item is to let attendees donate to charity in exchange for “Fyre Fest 2019” bracelets. In true Fyre Fest fashion, Stoner and his producers are keeping the other details ambiguous and disorganized.

“There’s a few ideas that we’re cooking up,” Stoner said. “It is on purpose to be a little bit unorganized, like purposeful disorganization. There’s a lot of thought in our disorganization, which is a really funny thing to say.”

In another move that emulates the haphazard spirit of Fyre Festival, the host of the Detroit LARP, Harsh Tokes Booking, is having to relocate its event after getting banned from the first planned location.

The original 2017 Fyre Festival was held in the Bahamas after getting booted from a private island the organizers claimed was once owned by Pablo Escobar. The festival’s advertising promised a getaway surrounded by influencers and models, big-name music headliners, luxury living situations, and top-notch cuisine. Hopeful attendees from across the globe paid thousands of dollars for what was supposed to be a fancy vacation—and instead got a Lord of the Flies experience.

People showed up to find soggy beds in leftover Hurricane Matthew emergency tents, no performers, and now-infamous cheese slices on pieces of bread. Amid the frenzy, flustered “festival”-goers documented the event on social media.

Here's the dinner they fed us tonight. Literally slices of bread, cheese, and salad with no dressing. #fyrefraud #fyrefestival #dumpsterfyre pic.twitter.com/NmNXakSFlq

Their posts spread like wildfyre, and it wasn’t long before those who’d been suckered in found themselves the laughing stocks of Twitter.

#FyreFestival is an art installation where mediocre people realize what their lives would be like without rich parents.

Do not let #FyreFestival refugees into the country. We cannot risk it if even ONE of them has been radicalized.

The catastrophe is now immortalized for eternity with two documentaries, one on Hulu and another on Netflix. The Netflix film highlights that the absurdity had consequences beyond disappointed rich people: Bahamian locals who helped out with the event were left unpaid. The fraudster behind the whole event, Billy McFarland, was sentenced to six years in prison for scamming investors out of millions of dollars.

If the 400-plus RSVPs on the Austin LARP event page and 1,500 RSVPs for Detroit are any indication, folks are eager to take part in mediocre recreations of the catastrophically mediocre event. And if attendees are disappointed, the LARPs will have succeeded.

“It’s incredible to me that people just want to enjoy like a pop-up experience, an interactive experience,” Stoner said. “They saw a shit show that was real, Fyre Fest. And they’re like, ‘Oh I want to do this.’”