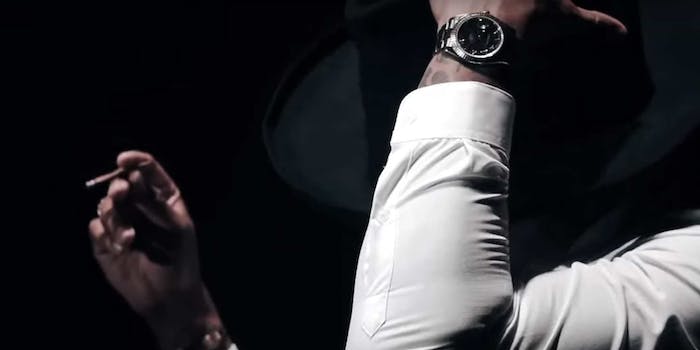 These hip-hop anthems conquered all.

Atlanta emperor Future bullied rap music in 2015. It was the year one of the genre’s most authoritative voices used free online mixtapes to develop and flourish a style that conquered all. But it was also the year that the mixtape tide finally turned back, and rappers moved away from using free music hosting sites like Datpiff and LiveMixtapes as the default vehicle for putting out their music—instead focusing on making money.

The most popular rapper on the planet put out two mixtapes and no albums in 2015. But unlike Drake’s seminal mixtape So Far Gone (still on Datpiff), which launched his career from Canadian television to the pop charts, both If You’re Reading This It’s Too Late and his collaborative project with Future, What a Time to Be Alive, were instead dropped into iTunes with a price tag. The ridiculously titled IYRTITL and WATTBA will live on forever under the “Mixtape” section of Drake’s Wikipedia page, but there isn’t a determinable difference between these “mixtapes” and his albums–especially with If You’re Reading This being available at Target and Walmart, and casually going platinum.

Perhaps Drake wanted to eschew traditional albums so he wouldn’t have to make liner notes giving credit to all of the dudes who actually wrote his raps. Even so, there seemed to be a shortage of mixtapes this year. For-pay music websites like iTunes, Bandcamp, and CD Baby have been accessible for years, but in 2015 overwhelmed my blog feeds. Rappers have become more efficient at getting remastered singles a proper release after they blow up on SoundCloud or YouTube. (See: Wap, Fetty.)

The landscape should get even more capitalistic next year, but in the meantime here are the year’s best free rap songs. Criteria for this list is simple: any rap song released within a free mixtape in 2015. That leaves out any song on a proper album. No To Pimp a Butterfly, no Dirty Sprite 2, and no IYRTITL or WATTBA. Other songs released as singles but not for free download or in a free mixtape—like the otherwise great “No Bankrolls (Remix)” by Tate Kobang and “Run Up” by Cam & China—were equally disqualified.

This list is as much a product of who put out free music in 2015 as it is taste. That is why a bunch of these come from Chicago and Atlanta, where fans still care enough about street music to download dang near anything off Datpiff.

When Drake first uploaded “Hotline Bling” on the Internet as a SoundCloud one-off, he titled it “Hotline Bling (Cha Cha Remix),” after the Hampton, Virginia, artist D.R.A.M. hit “Cha Cha.” Of course, Drake–forever the politician–didn’t immediately sample “Cha Cha” nor the original Mario Brothers sample that ended up getting D.R.A.M. in trouble. By the time D.R.A.M. had to change the beat for the official single release, Drake was long gone, erasing any ties to the original “Cha Cha.” But that version, with the uncleared Star World sample, was one of the most fun songs of the year.

Only slightly under the radar, Atlanta rapper K Camp had a quietly productive year. Now two years removed from his biggest hit, “Cut Her Off,” he was able to drop three solid singles in 2015, along with an album on which they all appear. “Comfortable” is easily Camp’s best work to date and may point to more singing in his future, but “Lil Bit” is also better than people give it credit for. Vaguely calling back to 50 Cent’s 2005 hit “Just a Lil Bit,” K Camp’s version is even more of a menacing turn-up. A looped noise that sounds like a chopped and screwed electric drill makes way for Camp to order, not ask, for listeners to “get fucked up.”

After the West Coast ruled last year with the passing car radio ubiquity of YG’s My Krazy Life, rappers like RJ were supposed to have next. But even Dr. Dre’s first album in 16 years, Compton, only featured one young rapper from the Los Angeles city limits.

RJ is at least releasing gems over DJ Mustard-inspired beats. RJ has a more nasally voice than Big Sean and he hasn’t developed much of an on-record persona, but the features from IamSu and especially Choice fill that void. Su winds between rapping and singing, and Choice appears both fed up and feeling himself. RJ still deserves top billing for lodging that chorus in my brain though.

When Tity Boi started officially going by 2 Chainz in 2011, he was born a new man. Charting mixtape singles and multiple platinum album singles made him something of a household name. But his second album didn’t chart as well despite being better than his debut, and now he’s right back to being the expert mixtape rapper he was circa the name change. “Watch Out” comes from Trap-A-Veli Tre, the third in a mixtape series that he hasn’t resumed since changing his name from Tity Boi. The mixtape itself was largely ignored, but Mr. Chainz is more natural underdog. The song itself is an obvious copy of the piano-driven OG Maco song “U Guessed It.” (2 Chainz was on the remix.) But where Maco garnered attention was with his cathartic screams, Chainz is all charisma, barely raising his voice. “You getting mad, I’m getting rich.”

The second-generation drill rapper Lil Herb (aka G Herbo) often gets cast in the shadow of his frequent collaborator Lil Bibby. I’ve always been unsure as to why, since Herb is almost obviously better at rapping, and it was Herb that uttered the amazing opening bars on their most popular song “Kill Shit.” Maybe it’s because Bibby tends to make more cohesive mixtapes, and fitting with that, Ballin Like I’m Kobe is pretty lopsided.

Still, “I’m Rollin” is a dizzying anthem full of violence, drugs, and remembrances. The song starts with a familiar Three 6 Mafia “yeah, ho” sample, and Herb listing off his slain friends, saying that if they were here, “They’d be off a hitter.” He repeats the song title a total of 32 times each chorus and it creates a delusional effect from the repetition and circling production. Let’s hope DJ Paul takes into account how good this song is when he sues the shit out of Herb for using his “yeah, ho” sample.

Chicago rapper Tink tried to make a splash in 2015 with a couple of ‘90s-referencing singles. One was “Ratchet Commandments,” a messy ode to Notorious B.I.G.’s “Ten Crack Commandments”; and the other was “Million,” a remake of Aaliyah’s “One In a Million” that was a little too on-the-nose for a collaboration between Timbaland and a young female artist. It turns out she should have been referencing ‘80s tracks all along. “The Afterparty,” from the tight Winter’s Diary 3, is pure synth pop. The song brings to mind another Chicago rapper who took similar influences, Kid Sister, but the lightness of the track and the detailed story of two people orbiting each other’s infatuation at a party might as well make it a Carly Rae Jepsen song.

Summer anthems came either in the form of icy detachment or leaned-out slurring. Leave it to Chicago, where the “Chiraq summer only like two months” and the beaches lead to Lake Michigan instead of some picaresque ocean, to fully encapsulate the mood of a weekend cookout. Lines like “I’m trying to see some bitches’ booties baking in bikinis” give escape to a city that can hardly go a weekend without more shootings.

While Philly rapper Meek Mill finally emerged into the mainstream in 2015, he had maybe the most bittersweet year of his career. Meek got his first gold plaque and toured the world with his girlfriend, but was also thoroughly humiliated by Drake and every rap fan who suddenly stopped caring who wrote their favorite songs. It was his throwback one-off from a random DJ Clue mixtape that Meek seemed to have the most fun on, going back to his early cornrowed mixtape days. Along with Quavo and Takeoff from Migos, Meek kicks some truly old-school misogyny that still sounds better than their last collaboration, “Migos Dreams.”

Young Thug had a busy year. In addition to releasing three mixtapes; appearing on singles by Jamie XX, Tinashe, T.I., and Yo Gotti; getting featured on Lil Boosie’s comeback album and the Furious 7 soundtrack; plus doing a song with Justin Bieber; the Atlanta rapper also got engaged and tangentially implicated in an apparent attempted murder of his idol.

Whether Thug was putting out proper-ish singles like “Hercules,” “Pacifier,” and “Speed Racer,” or random loosies found their way to the Internet like “Beast,” “I Mean,” and “Spaghetti Factory,” his output was breathtaking. Even without climbing the charts like the year prior, Young Thug did crack the Billboard Hot 100 with “Best Friend” at No. 98. Built around a plucking harp and a borrowed chorus, Thug expels some of his most unique phrases.

Future ran 2015, even without so much as an album going gold (yet). He took the momentum he gathered from last year’s Monster mixtape and put it into hyperdrive with Beast Mode and 56 Nights in the first half of the year. He also dropped probably the album of the year and let Drake ride his coattails with their shared project. And even though Future’s biggest hit of the year was “Fuck Up Some Commas,” it was the single that didn’t even chart which made the largest impact.

“March Madness” isn’t even be the best song on the fantastic 56 Nights mixtape (that would be “Never Gon Lose”) and barely got any airplay, but it was omnipresent. It might’ve been that the song kept showing up everywhere besides the radio–the club, passing cars, NBA games–or that it felt like the most politically charged rap hit of the year not by Kendrick Lamar, if only for the chorus line, “Balling like the March Madness/All these cops shooting n***as, tragic.” Either way, it never left the CD player in my car.