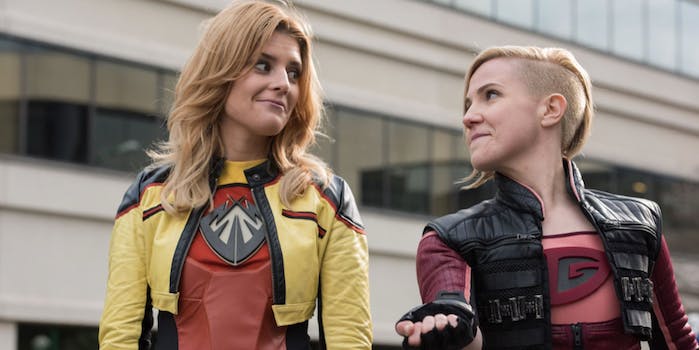 Fullscreen is the latest subscription-based streaming service you’ll have to contemplate, and today it announced an impressive lineup for its April 26 rollout.

Already announced as a Fullscreen joint, Grace Helbig and Hannah Hart’s superhero film Electra Woman and Dyna Girl debuts tomorrow on the platform, and Fullscreen is treating fans to free pizza as part of the social media push. All you have to do is tweet a selfie and to get a chance to have pizza delivered to you, which seems like it should already be a service. The film debuts on other platforms June 7.

Paul Scheer’s Filthy Preppy Teen$, My Selfie Life, Kingdom Geek, Shane Dawson’s Shane & Friends, and Zall Good with Alexis G. Zall are also part of the new lineup. Newly announced shows include Slumber Party With Alie and Georgia, Explain Things to Me, Waste of Time With ItsTheReal, and daily sketch show Party in the Back.

One of the bigger announcements is that American Psycho author Bret Easton Ellis will be directing a series for Fullscreen, called The Deleted. It’s described as a thriller about the “disappearance of three seemingly unconnected people from Los Angeles,” which, in true Bret Easton Ellis style, “triggers a collective paranoia among a group of twenty-somethings” who were part of a cult. Let’s hope this is better than The Canyons.