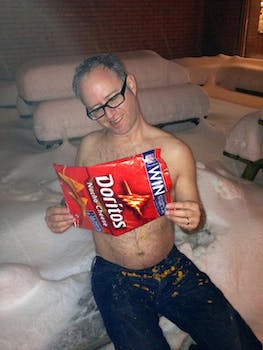 Frosting is the new icing

From a small town in Montana, a new winter tradition has emerged: frosting, where individuals carry out summer activities as if it's not freezing outside.

Winter in Missoula, Mont. can be painfully long, filled with endless gray days when all you long for is a carefree summer afternoon on your front porch with a local beer in hand. I would know, as I’ve had plenty of those thoughts during my last five Montana winters.

But on Facebook, it seems cabin fever is setting in a little deeper this year. Folks are throwing comfort—and common sense—aside to partake in something call frosting, which is basically a wintry version of Planking.

The phenomenon was started a few weeks ago during a massive blizzard that covered western Montana in more than two feet of snow in just a matter of days. During the storm, John Brownell wandered outside, propped his feet up on a table, and read a magazine before having a friend take a picture—the idea being that no amount of snow was going to hamper his summer dreams. Upon seeing the resulting photo, Ryan Maynes headed outside and followed suit.

I just wanted to do something fun with all the snow outside.

Soon after Mayners coined the term frosting and encouraged some friends to head outside and make their own photos. He said he expected a handful of friends to head out in the cold. Little did he know that the bizarre activity would take off, fueled by the ease of photo-sharing on Facebook and social media.

At first photos were being shared only on Colin Hickey’s Montana is for Badasses page, but upon seeing the popularity of the inaugural picture, which was liked 500 times the first day and shared more than 200 times, he decided to create Frosters Anonymous. The page took off immediately and within 30 minutes had gained 100 fans. Two weeks later, the page is about to creep past 5,000.

Now Frosters Anonymous is flooded with images of people hanging out in their bathing suits, playing kick ball, and even a snowman getting to second base. Mayners said he is shocked about how the joke has taken off, although he said it’s the type of thing that could happen in Missoula, a quirky and lovable college town in the mountains.

“People took it to a crazy level, people have even taken tubes on the river,” he said.

Hickey was also surprised the phenomenon spread from Montana to Alaska. Due to Frosting’s popularity around town, he has gone as far as making commemorative T-shirts. Hickey said he hopes Frosting will become an annual activity during the first snow.

“Everyone gets to take their picture, put it (on Facebook) and be famous for a moment,” added Maynes. “It’s a shared experience.”