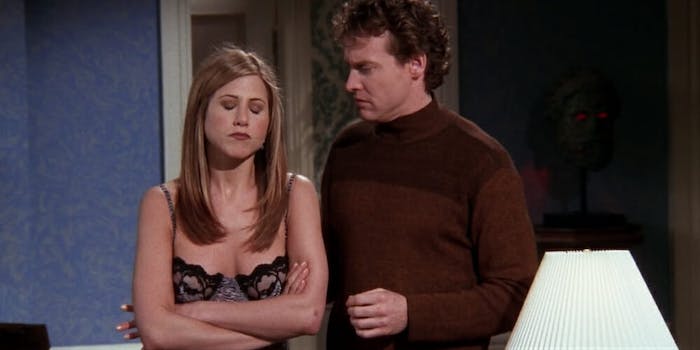 'The One With The Glowing Eyes.'

Fans of the iconic sitcom Friends just noticed something unusual in season 4 episode 18: “The One With Rachel’s New Dress.” Glowing, red eyes can be seen behind Rachel and Joshua in one scene of the episode, as the Daily Mail pointed out.

The eerie eyes belong to a statue in the Joshua’s parents’ house. In the episode, Joshua’s parents catch Rachel off-guard in her lingerie, so she then comedically tries to pass it off for a Bloomingdale’s dress. The eyes glow on-and-off throughout one of the scenes.

It’s not the first blunder to be recently noticed by fans. A Twitter user pointed out that Joey can be seen mouthing Ross’s lines in “The One Where Ross Dates A Student” of the very first season.

Another Twitter user pointed out that you can also see him mouthing Rachel’s lines while she says them, in a season six episode.

“Joey mouthing ‘I love it at Joey’s’ as Rachel says the words. #FriendsFuckUps,” the user wrote on Twitter.

Friends first premiered in 1994 and can still be seen on Netflix after the streaming giant extended its rights in 2018 from AT&T’s WarnerMedia for $100 million dollars, according to the New York Times. The show may be leaving Netflix soon, as the deal was only through 2019, and WarnerMedia is starting its own streaming service, which will likely host the show, according to Recode. So go watch and find all the Friends’ bloopers on Netflix while you still can.