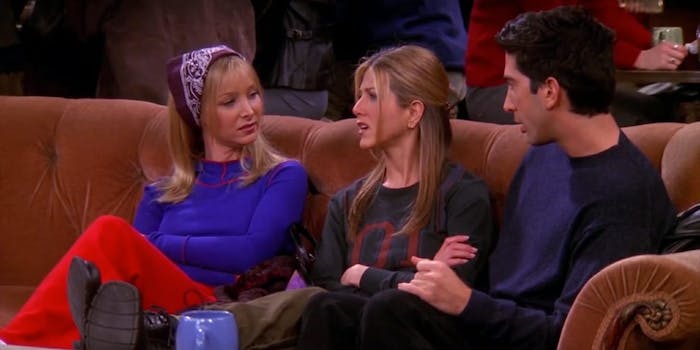 Is this ‘Friends’ DVD cover trying to tell us something?

The one where Rachel woke up.

Could there be anymore Friends fan theories? Yes, yes there can – and this one seems to be sticking with many.

The Twitter world recently exploded when one user, @TheTedFox, struck a chord with ’90s fans while questioning one character’s pose on the Friends season 4 box.

All six Friends are pictured lying in bed together, however Rachel’s (Jennifer Aniston) eyes are the only ones open. Not only are they open, they appear wide-eyed, almost as if she’s gazing off into a fantasy. That’s all it took for Friends fans across the globe to explode into a plethora of replies.

Some believe the pose emphasizes Rachel being the only “woke” member of the crew.

Jokes aside, Rachel was very woke in her interview with Mr. Zelner… they might be on to something.

Others theorized a darker answer—Rachel murdered all of the Friends, so she’s the only one left alive.

The majority of replies, however, landed on the answer that it was all Rachel’s dream. Yes, all of it. From the season opener, with Rachel sitting in the dress she’s supposed to get married in, all of it was a fabricated dream in order to escape the reality of her future, unhappy life with Barry. One fan in particular, user @lovetherobot, tweeted his theory with a full explanation. So did she ever waitress at the Central Perk? Date her assistant, Tad? GO ON A BREAK WITH ROSS? Were these all just made-up events?!