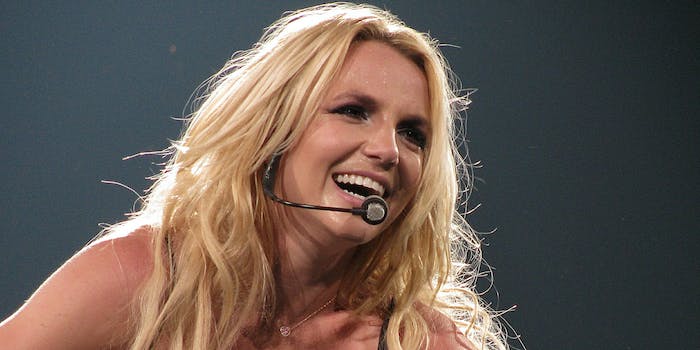 What is the #FreeBritney movement, and why is Cher tweeting about it?

Where in the world is Britney Spears?

The notoriously tumultuous life of Britney Spears took yet another bizarre twist in early 2019, when the pop superstar abruptly canceled her second Las Vegas residency, Britney: Domination. At the time, personal reasons had been cited as her excuse. However it was this turn of events—and the subsequent cracks in stories from her team—that ended up being the catalyst of what Britney fans now refer to as the #FreeBritney movement.

But what is going on with Britney? Who does she need freeing from? And how did Cher, of all people, get involved in all of this? The answers are as convoluted as they are complicated, and require quite a trip down the rabbit hole.

Spears had been slated to kick off her residency at the Park MGM Theater in February, which would have banked her over $500,000 per show. The reason for the cancellation was allegedly due to the fact that her father Jamie Spears had suffered a life-threatening colon rupture and she wanted to spend time with her family. Spears penned a seemingly heartfelt message to her fans on Instagram, stating as much to be true.

On paper, this all sounds pretty normal and reasonable. At least, for those without a passing knowledge of the conservatorship that Spears has been locked into since the aftermath of her messy breakdown in 2008—and which was supposed to have ended following after her Circus Tour in 2009. For over a decade Spears had been paying more than $1 million per year in fees and legal expenses related to the conservatorship (or Cship, as Britney stans call it), including Jamie Spears’ $16,000-per-month salary.

Amid news of her father’s heath issues came trickling in reports that the medication Spears takes for an alleged bipolar disorder had stopped working, which was said to have been exacerbated by the stress. Her team then announced that Spears would be going on an indefinite work hiatus.

The following month, Spears checked herself into a mental health facility leaving some fans to speculate whether her father had forced her into it.

In May of 2019, Britney’s manager Larry Rudolph threw gasoline on the #FreeBritney movement by claiming that his longtime client would not be returning to her Las Vegas residency—or performing again, possibly ever.

“As the person who guides her career—based on the information I and all of the professionals who work with her are being told on a need-to-know basis—from what I have gathered it’s clear to me she should not be going back to do this Vegas residency, Rudolph told TMZ. “Not in the near future and possibly never again.”

“Last summer, when she wanted to tour, she called me every day,” he continued. “She was excited. She hasn’t called me in months. Crickets. She clearly doesn’t want to perform now.”

Conspiracy theories surrounding the #FreeBritney movement began to reach a fever pitch online. The Britney’s Gram podcast began questioning Spears’ condition and whereabouts, citing an anonymous paralegal source, who claimed that Spears had told a judge that she had been held against her will in the mental health facility since January 2019.

To make matters worse, on September 3, 2019, news broke that Jamie had allegedly assaulted Britney’s 13-year-old son Sean Preston, and had kicked down the door to the boy’s room during an argument. The incident triggered a child abuse investigation (which he was later cleared of) and Kevin Federline, the father of her two sons, successfully obtained a three year restraining order to ostensibly protect his boys from their grandfather.

Lynne Spears gets on board with #FreeBritney

In the wake of the criminal investigation against him, Jamie Spears asked a court to “temporarily relinquish the powers of conservatorship,” citing his ongoing health issues. It was at this time that Britney’s mother Lynne Spears became involved, who tried to wrestle away the reigns of the conservatorship from her ex.

According to TMZ, Lynne went before a court in the wake of Jamie temporarily stepping back and tried to make the case that her daughter would do better off under her guidance. Lynne reportedly agreed with the #FreeBritney movement that Jamie had done a poor job with Britney as of late. Unfortunately, the judge didn’t see it the same way and rejected her claims—a decision that was scrutinized by fans.

However, the outlet also reported that Britney was apparently not doing well in the wake of the ruling. “She goes through cycles, and hopefully we’re at the bottom now,” claimed one source.

As to what happens next—that much is unclear. In late December, Los Angeles Magazine published a lengthy report titled “Inside the Battle for Britney Spears,” that attempted to investigate some of the farfetched (and not so farfetched) claims of the #FreeBritney contingency.

Among some of the more nefarious allegations involves just who, exactly, is documenting Britney’s seemingly happy, but otherwise mysterious social media presence—often featuring her 25-year-old boyfriend, Sam Asghari. The piece claimed that some of Spears’ “more conspiratorial” fans express doubts about who is actually the man behind the curtain, so to speak.

Cher sounds off on #FreeBritney

The #FreeBritney movement picked up steam once again this week when Cher tweeted the LAMag article, demanding answers. “Just enough meds to keep her working, but not enough to have a life,” fired off the 73-year-old Goddess of Pop in all-caps.

Inside the Battle for Britney Spears https://t.co/t6McOBuuSv via @LAMag POSSIBLE …JUST ENOUGH MEDS TO KEEP HER WORKING,BUT NOT ENOUGH TO HAVE A LIFE

Others were happy to have Cher shed some light and visibility on the movement, even if it just helps getting folks talking about what in the heck—if anything—is going on with Spears.

.@Cher tweets in support of Britney Spears and the #FreeBritney movement. pic.twitter.com/xI9ATAtPPu

Even the author of the LAMag piece, as well as Britney’s Gram podcast, chimed in to express gratitude for the Cher bump:

When @cher retweets the investigative article you spent 4 months researching, it's almost as good as getting paid, but seeing her get behind #FreeBritney is even better #Grateful #IGotYouBabe https://t.co/Xp4Q19et73

We love you more than words @Cher! Thank you for calling attention to this and for literally everything you've ever done. SNAP OUT OF IT, LA COURT SYSTEM! https://t.co/cCf8iMxHs5

Clearly, we have not heard the last of the #FreeBritney saga—with parental figures, lawyers, courts, and even fans all thinking they know what’s best for the pop singer. With any hope, somebody out there does.