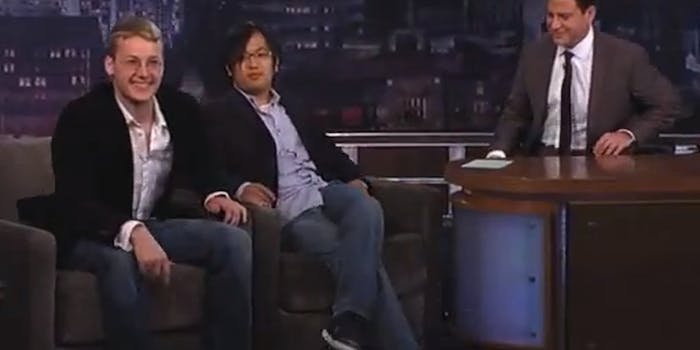 Freddie Wong and Brandon Laatsch, some of the biggest original filmmakers on YouTube, talk up their work with Jimmy Kimmel.

YouTube stars are invading your television—and not through some newfangled Google TV, either.

Host Jimmy Kimmel introduced the duo by calling them “two of the world’s most popular filmmakers.”

“Their videos online have been viewed over 400 million times. Eat that Steven Spielberg!” added Kimmel.

Both Wong and Laatsch, who often play frenetic characters in their own videos, were calm and personable throughout the nine-minute interview, which covered topics like the duo’s first meeting, piracy, Twitter, and guerrilla filmmaking practices.

“You wouldn’t think that there would be nerdy guys watching things online,” joked Wong about the success of his two channels.

Since 2006, Wong has racked up 452 million views and more than 2 million subscribers. His primary channel is the 8th most-subscribed-to channel on YouTube.

In an email to the Daily Dot, Wong explained Kimmel was “hooked” ever since Jon Favreau, who worked with Wong on a Cowboys & Aliens spoof, showed him the duo’s work.

“We were a little surprised because we don’t expect [to be] going on talk shows—we’re always working on our videos—but it was totally awesome and we had a blast doing it.”

Expect more YouTube stars to cross the divide, as broadcasters wake up to the reality of their ever-growing fandom. Rhett and Link, known as the Commercial Kings on IFC, were interviewed by Conan in July, and Epic Meal Time were guests on Jay Leno in March.