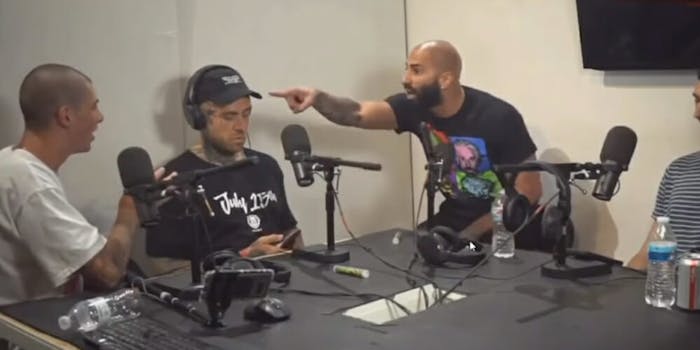 The viral prankster is furious.

Yousef Erakat, otherwise known as FouseyTube, is not having a good week.

The YouTube prankster’s show at the Greek Theatre in Los Angeles was abruptly canceled on Sunday after an alleged bomb threat.

A call to the LAPD claimed an explosive device was somewhere on the theater property. The police action forced the evacuation of about 1,500 people and forced FouseyTube to move his show to the arena parking lot. Then things went off the rails for the viral star.

Police found no evidence of a bomb and believe the incident might be another case of “swatting,” where someone calls law enforcement as a prank. The incident is the third evacuation, the second involving a bomb scare, over the last few weeks at a location in L.A.’s Griffith Park area, the neighborhood where the Greek Theatre is located. But FouseyTube feels like there are other factors at play.

Fousey explained his problem with how the events unfolded on a recent appearance on the No Jumper podcast and pointed the finger—literally—right at another YouTuber, Sam Pepper.

Pepper was arrested at the event and FouseyTube feels this arrest led Pepper fans to swat the show.

The actor, rapper, and comedian also went after Keemstar, host of Drama Alert, claiming he was trying to profit off of the madness. Keemstar, real name Daniel Keem, was in attendance at the show and filming a documentary. FouseyTube gave his blessing to Keemstar on the documentary idea, but fans are now claiming the YouTuber “wanted the event to fail” to make for good drama on camera.