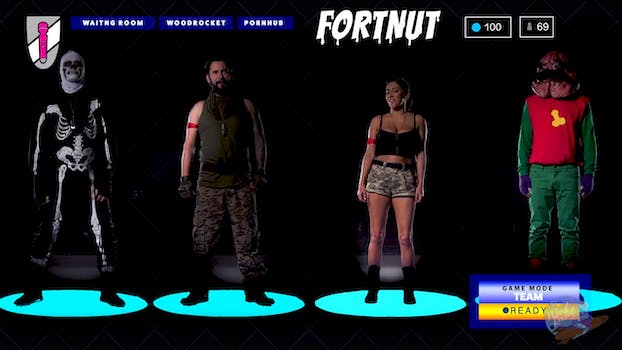 For anyone who doesn’t want Victory Royales interspersed with gratuitous vagina shots, there’s a steamy YouTube trailer. It’s still devoid of the stuff that might be too hot for browsing around other people. With that said, it’s still pretty raunchy and probably not safe for work.

“Let’s drop into Testicle Town!” proclaims a mascot with a testicle for a head. His name is Testiclehead, obviously. And Testicle Town is a real shop that sells sex toys, apparently, but its real-world title is the Lion’s Den adult bookstore, according to the credits.

At that point, the sassy female lead Ramirez picks up a container of what she believes to be a power-up, which we already know is, well, not. It’s semen. She spits it out, grimacing. “This isn’t shield juice, is it?” she asks before spitting it out.

“So how much longer ’til the storm comes?” asks Jonesy.

“How much longer until you…come…sss…?” she replies. It’s genuinely hilarious.

Our only real complaint? Jonesy has a pretty awful sunburn on his shoulder, and we’re a little concerned. It’s really, really red.