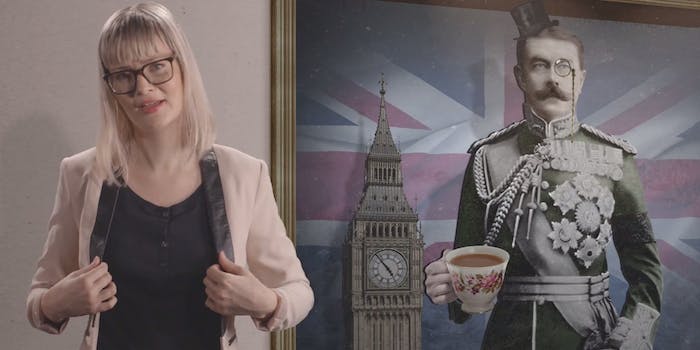 Screengrab via Above Average

It’s intriguing how history is able to apply a respectable, if not outright romantic, gloss to even the most reprehensible figures.

Blackbeard—appearing now in bear form—has his murderous, psychopathic urges dismissed as a mere by-product of the rough and tumble Golden Age of Piracy. And although dismembering prostitutes would horrify today, Jack the Ripper maintains a legacy mollified by some sort of Victorian pantomime mystique.

It’s even a phenomenon of the modern day. No one seems to remember that Matthew Broderick killed someone. Because, hey, he forgets why he was driving on the wrong side of the road, so why shouldn’t you.

So it’s nice to finally have someone calling out history’s worst for what they really are: Assholes.

In the first of six episodes of Above Average’s Forgotten Assholes of History we are introduced to Herbert Kitchener, the British commander-in-chief during the time of the Second Boer War in what is now known as South Africa.

While Lord Kitchener (as he was then styled) is hardly unknown or forgotten—he does, after all feature in one of the more memorable posters of all time—his role in the creation of concentration camps is often overlooked.

The Second Boer War, reductively described in the series as “two types of white people fighting over who could steal the most gold and diamonds from Africa,” saw the British adopting a “scorched Earth” policy to slow the guerilla fighting of the Boer (descendants of Dutch settlers) enemy. This included the internment of civilians.

By 1901, over 93,000 Boers and 24,000 black Africans were reported to be in these camps. About one quarter of the Boer inmates and (a very conservatively estimated) 12 per cent of the black Africans interned died, through a combination of disease, starvation, and exposure; a product of the disgraceful indifference and incompetence of their captors.

This is all mentioned by the series—presented by the lively Siobhan Thompson—but there are details that they missed that paint Kitchener in an even poorer light.

After news of the deaths filtered back to Britain, and debate raged within Parliament, Kitchener called to account and in an apparent act of contrition, issued directives that no more families were to be brought into camps. While such a move may have appeased the concerned parties in Westminster, Kitchener made the decision fully aware that with their farming lands now destroyed and homesteads burnt to the ground the survival of the remaining civilians would be almost impossible.

Perhaps “asshole” is a little too kind.