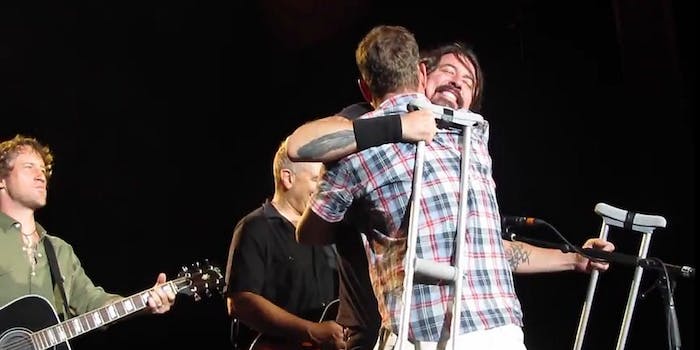 Why does everything the Foo Fighters do turn to viral gold?

5 reasons the Foos run the Web.

At their show this week in Colorado, Dave Grohl and the Foo Fighters went viral yet again. The Foo Fighters’ singer/guitarist found a grown man in the crowd who was crying during an acoustic version of, “My Hero.” So, Grohl brought him up on stage and, after nearly misting up himself, he sang directly to the man he called a “drunk, emotional mess.”

It was sweet. It was spontaneous. And, like most everything the Foo Fighters touch lately, it was viral gold.

If you’ve seen a ton of Grohl and company in your Twitter timelines and on your Facebook feeds, you’re not alone. Because the Foo Fighters, in the middle of a U.S. tour, seem to have taken up residence in every corner of the Internet universe.

Either Grohl is serenading a man with tears running down his face—apparently the man had just buried his mother—or he’s being wowed by a Canadian performing a solid imitation of Rush singer Geddy Lee during a “Tom Sawyer” cover. Or he’s stopping the show to let a fan perform on drums. Or he’s breaking his leg while falling off the stage, only to return to finish the setlist. Or he’s unveiling a kickass resting throne for his broken leg.

Or, 1,000 Italian musicians are paying homage to the band and beseeching its members to play a show in their town.

Two decades after an eponymous debut album hit stores, the Foo Fighters remain one of the biggest bands in the country, one of the most popular in the world. And people can’t help but click on the videos that showcase the exploits.

But why does everything the Foo Fighters do go so viral? I’ve been a fan since I saw the original version of the Foo Fighters at a small club in Atlanta in the mid-’90s (I remember the lead singer of the opening act, Michael Franti from Spearhead, moshing next to me during the set), and I still dig the band. Yet, it’s not difficult to understand why some are annoyed that social media has to smack us across the face every time the band does something notable.

In times like these, there must be a reason, right? Of course there is. Let’s see why the Foo Fighters have made good on the promise to keep sticking around (in our social media feeds).

1) Everybody tapes everything at every concert ever these days. If something original happens, it’ll be posted on YouTube. Now, if something funny or weird happened at a metal show in front of 300 people, the Internet probably wouldn’t take notice. But with the popularity of the Foo Fighters, it’s almost impossible to keep the images of a crying man hugging Grohl under the radar. I saw Green Day at a small venue in college, in the valley of the band’s career between the Dookie and American Idiot albums, and during the show, the band picked three people from the audience to take over the guitar, bass, and drums and play a Green Day song. If YouTube or the term “viral” had existed at the time, a stunt like that probably would have done so.

Here’s what a more recent version of the stunt looked like.

2)  A still-sharp sense of humor. Grohl is funny—he’s always been funny—though maybe not everybody would agree. The funnier you are, the more people will want to laugh with you online. Grohl’s reaction to the Canadian man channeling Geddy Lee was hysterical. 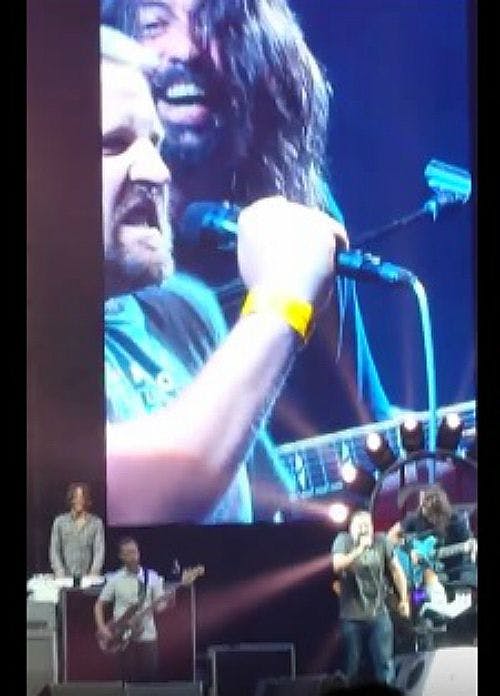 That sense of humor and childlike joy shown by Grohl is one reason that a number of YouTube versions of that performance have been viewed than 1.5 million times in less than a week.

3) Foo Fighters are still so very popular: Find me another mainstream rock band who has had the staying power of Foo Fighters and who can fill arenas (and a stadium every now and again) all over the world. Aside from U2, not many do. One of my Daily Dot colleagues called Grohl the Taylor Swift of the dad-rock genre. At first, I believed that to be untrue. But look at the guys in the viral videos. All of them could be dads. I’m a dad. Maybe the Foo Fighters is to my generation what Elton John and Billy Joel were to my dad’s generation and what Lawrence Welk was to my grandfather’s generation. The difference is the dads of this generation eat YouTube clips for breakfast.

4) As a corollary, mainstream rock has never been less dynamic and interesting. The Foo Fighters carry the flag for one particularly comfortable sound, and do so admirably. Someone has to take on the electric Mumfords of the world—the guy with the wallet chain who is still peeling off black polish from his nails needs a hero too.

5) The broken leg and rock throne: Since injuring himself, Grohl has been less mobile on stage, and that seems to have helped the viral process. Though he’s still playing his guitar, Grohl has to sit and watch as his unknown co-stars make themselves temporarily famous. As he sits, he has to cede part of the spotlight to others, and the inclusion of a wide variety of others seems to keep these videos fresh. It’s not Grohl all the time. It’s the teary-eyed man in the plaid shirt, it’s the Canadian who can hit those high notes, it’s the 1,000 Italians. Grohl isn’t the only one getting the best of you. It’s everybody else who’s helping make this happen.

Or as Grohl told the crowd after saying goodbye to the crying man at the Colorado show, “You never fucking know what’s going to happen when you come to a Foo Fighters show.”

I suppose that’s true. But it’s also a good bet that you’ll see it the next day all over the Internet.