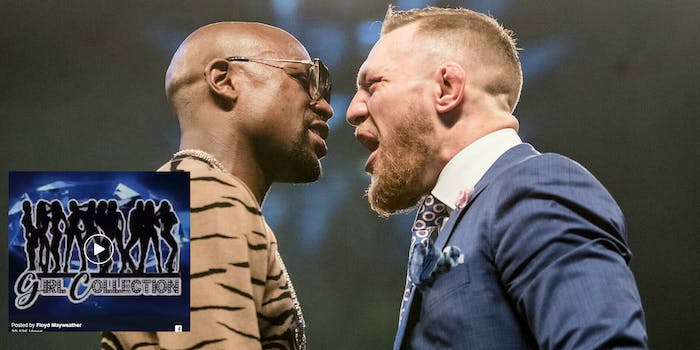 It’s Mayweather-McGregor fight week, and all Mayweather can tweet about is his strip club

As the Floyd Mayweather–Conor McGregor fight week begins, Mayweather doesn’t appear to be spending much time thinking about his opponent for Saturday night. Mayweather’s PR team is sending out news releases about the fitness app and virtual-reality experience he’ll unveil in September, and he’s been hobnobbing with James Corden and Jimmy Kimmel on the late-night talk show circuit.

And if you happen to have looked at Mayweather’s Twitter and Instagram pages in the past several days, you won’t find much about boxing, McGregor, or training to box against McGregor. Instead, you’ll find advertisements for Mayweather’s new strip club.

Forget about the fight that could shatter the all-time pay-per-view record and the possible $200 million he’ll make from partaking in the McGregor fight, Mayweather seems more interested in talking about the gentlemen’s club he owns.

Mayweather opened Girl Collection in May in Las Vegas, and with the sports world focused for the past few months on the Mayweather-McGregor fight, which also happens to be in Las Vegas, Mayweather is getting in some online advertising.

Mayweather, in fact, hasn’t Instagrammed anything relating to boxing in nearly two months save for a how-to-buy-tickets promo. Instead, he’s posted photos of himself playing basketball, sitting around with a bunch of money nearby, and paying off millions of dollars to the IRS.

Believe half of what you see and none of what you hear, especially when it comes to media in this country. While everyone is counting my money and assuming the worst, these are the facts… Uncle Sam, received $26,000,000.00 from me in 2015! What else could they possibly want? I'm sure I would have been notified much sooner if there were any real discrepancies right? Bottom line, everybody just wants to be a part of the "Money May" show, including the IRS! That's fine, you can crunch numbers all day but in the end, my empire is rock solid and intact! Now Calculate That! #TMT #FloydMayweather #TBE #Mayweather

Is Mayweather really not taking McGregor seriously? Is he seriously not training and just hanging out at the club all night long? Probably not.

Mayweather is the best boxer of his generation, and there’s almost no chance he’ll be caught by surprise by anything his neophyte opponent accomplishes on Saturday. A loss to McGregor would be the biggest upset in sports history, and it would tarnish Mayweather’s reputation forever. Mayweather won’t let that happen.

In effect, Mayweather is playing a game, hoping people will see his apparent lackadaisical attitude, which would then cause them to bet on McGregor and which would then lower the betting line. Thus, when Mayweather bets on himself, he’ll have much better odds and earn himself even more money.

But all is not well in Mayweather’s social media world. Until Monday afternoon, he had about six or seven Instagram posts that advertised Girls Collection. Then, they all disappeared at about the same time media outlets were reporting that Mayweather went “insane” and “nuclear” after Justin Bieber unfollowed him on Instagram. Mayweather also reportedly called Bieber a “traitor.”

Perhaps, it’s a coincidence. Perhaps not.

You know what? Maybe it’s time for Mayweather to get off social media for the week. Despite the fact he’s participated in some of the most-watched boxing matches of the past decade, Mayweather, thanks in large part to McGregor, is drawing more attention than ever in the mainstream media world. His long history of misogyny—spelled out comprehensively by Deadspin, which called him a serial batterer of women in 2014—and the fact he served two months in prison after pleading guilty to misdemeanor domestic assault and harassment charges means he probably shouldn’t be so zealously advertising a club that, many would say, exploits women.

But he obviously doesn’t care and does so, no matter the visuals.

Besides all that, in a few days, a dude with bad intentions is going to be winging powerful punches at Mayweather’s face. Maybe his strip club or Bieber’s Instagram habits shouldn’t be lodged in his mind when McGregor is the one who’s actually trying to dent it.