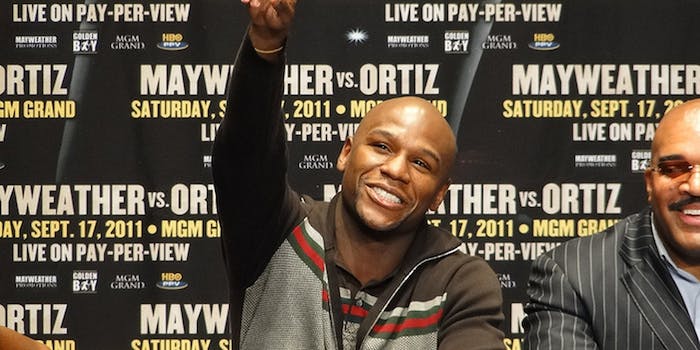 Pacquiao may not be active on Twitter, but there's no way he didn't hear Mayweather call him out.

In the tweet heard round the world, Floyd Mayweather has officially challenged Manny Pacquiao.

“Manny Pacquiao I’m calling you out let’s fight May 5th and give the world what they want to see,” Mayweather posted about two hours ago. That message was retweeted more 36,000 times, according to Topsy, a social media search engine.

Mayweather had reason to be boastful. He apparently won $400,000 on a bet last night about the BCS national championship. And the controversial boxer’s three-month sentence for assault charges was pushed back until June to accommodate a blockbuster fight.

“My Jail Sentence was pushed back because the date was locked in. Step up Punk,” he quickly added in a post that was retweeted an additional 7,000 times.

The only problem is that Pacquiao isn’t exactly tech-savvy. The Philippines’ reigning pound-for-pound champ, best known as “Pacman,” has only 112 total tweets and last used his verified account since Dec. 17.

But judging from the visceral, online echo chamber, there’s no doubting that Mayweather’s challenge came in loud and clear.

“OK @MannyPacquiao It’s up to you. @FloydMayweather has called you out publicly. Time for you to respond. #boxing #getitdone,” posted Kevin Iole (@kevini).

“Pac Manny ducking cause he know he gonna get his ass handed to him hahaha I told floyd beat his ass before he go to jail,” added rapper 50 Cent (@50cent).

Pacquiao has yet to respond.