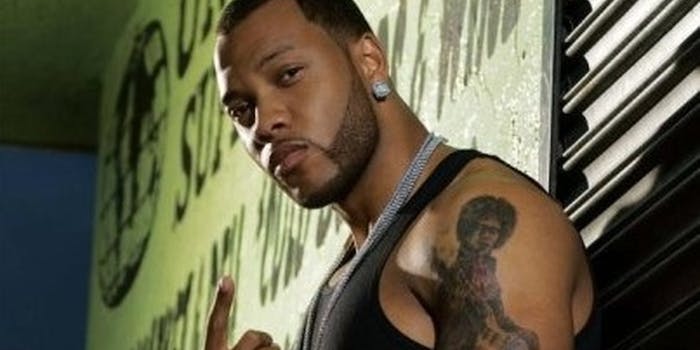 Mothership Music is seeking $80,000 in damages after the rapper failed to appear at the 2011 Fat As Butter Concert.

There have been a number of cases where an individual has been served with legal papers through Facebook, but none as high-profile as Flo Rida.

The rapper was scheduled to play at the Fat As Butter festival in Australia last October, but failed to show up despite being paid a $55,000 fee.

The district court in New South Wales froze assets that Flo Rida, real name Tramar Dillard, has in Australia, yet the 32-year-old apparently dodged a number of attempts by officials to serve him with papers during a recent visit.

That led to the court allowing a claim seeking damages for breach of contract to be served to him through his official Facebook page. A few weeks ago, Dillard was ordered by a judge to pay Mothership Music $80,000, including damages.

Brent Lean of Mothership Music said attempts had been made to serve Dillard with the claim while he visited the country for the Supafest tour and the Logie television industry awards.

“We tried to serve him physically on several occasions when he was out here but he got wise to it pretty quickly,” Lean said, according to ABC News.

A judge allowed the claim to be served through Facebook after determining that Dillard is a prolific user of social media and that there was a high likelihood he would see anything sent to him via social media services.

The claim sent through Facebook included a message from Mothership, where the company said it was ”seeking damages for breach of contract … (for) your non-appearance on 22 October 2011 at the ‘Fat as Butter’ Concert.”

Flo Rida now must respond to the claim with his defence within 28 days or the court may enter judgment against him without any further notice. Mothership Music’s lawyers say they will push for further damages as the case drags on.

The rapper’s camp hasn’t yet explained why he failed to perform, though the promoters claim it was due to a disagreement Dillard had over his hotel accommodation.

A number of posts on Dillard’s Facebook page express anger over his actions.

Referring to the legal claim, Alexandra Rose said, “I can’t wait to see this! You’re a pig!”

“You get paid to do a job—YOU DO THAT JOB!” wrote Simone Bremen. “You don’t run off like a thief with the money… Anyways Australia Hates you!”

There have been other cases in Australia where people have been served through Facebook. In 2010, police served a court order on an alleged cyberbully after attempts to do so in person failed. In 2008, a lawyer won the right to serve papers through the site.

Meanwhile, in February, an English High Court judge ruled that Facebook could be used to serve legal claims against two investment managers.

For Flo Rida, it seems like he’s gotta get his “Money Right.”