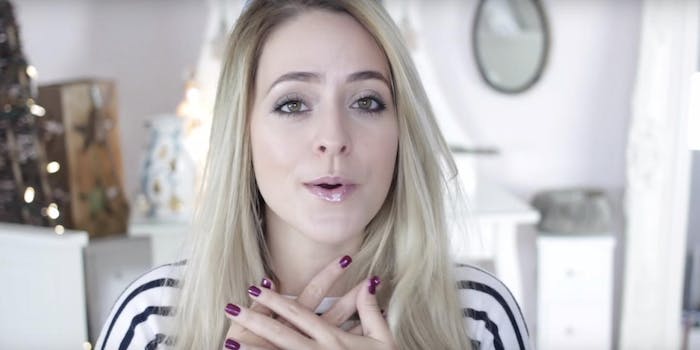 Fleur opened her channel in September 2009 and has been beautifying the Internet airwaves ever since.

With Fifth Avenue exploding into a winter wonderland and my YouTube subscription list filling up with Christmas hauls and cookie tutorials I have no ability to execute, I feel confident in announcing the holidays are officially upon us. And this year, instead of relying on Amazon to find that perfect gift for your aunt/doorman/boss/dog walker, look no further than pioneering beauty and fashion vlogger Fleur DeForce.

Her mother convinced Fleur to join YouTube, after the now 27-year-old couldn’t stop talking about the beauty community she’d discovered making videos online. With the support of her then-boyfriend (now-husband) Mike and their menagerie of animals, Fleur opened her channel in September 2009 and has been beautifying the Internet airwaves ever since.

By the time she was set to graduate university, Fleur’s channel had grown so much that she began making videos full-time, hitting 1.7 million subscribers this year on her main and vlogging channels. Her channel is filled to the brim with hauls, makeup tutorials, outfit inspiration, gift guides, and monthly favorite videos. What sets Fleur apart within the beauty community is her relatability and authenticity as a creator. Her fans trust her completely because when talking to her audience, Fleur is talking to a friend, giving makeup tips and style advice that she’s tested and supports. In her daily vlogs, Fleur is Fleur, sharing both her great and rubbish moments that further support her life motto: Pursuing hardwork and happiness pays off.

In the past year, Fleur’s empire has far exceeded YouTube: In February, she published her first book, The Glam Guide; she launched her own makeup line mere months later; and this month, InStyle magazine awarded her with the “Best Get Ready With Me” video and “Outstanding YouTuber of the Year.” Her success is incredibly well-deserved as her example continues to inspire women not to lean in, but to strive in both business and family to live the life they’ve always dreamed.