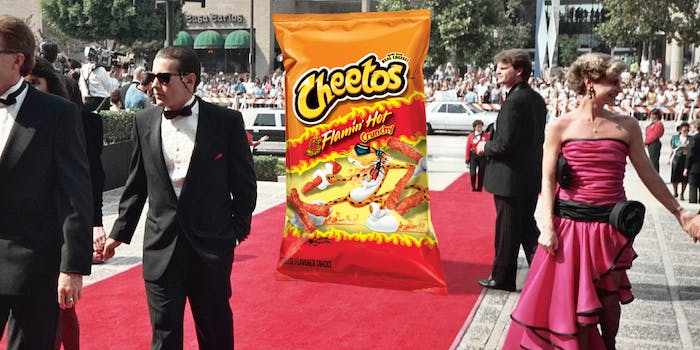 There's only one man who can possibly make this movie work.

Your favorite convenience store purchase is about to become a major motion picture, and it actually sounds inspiring as heck.

Fox Searchlight announced this week that it has signed off on a Flamin’ Hot Cheetos-inspired movie, based on the true story of how the beloved snack food came into existence. Back in the late ’70s, a man named Richard Montañez left his job picking grapes to start working as a janitor at the Frito Lay factory in Rancho Cucamonga, California, where Cheetos just so happen to be made. After the equipment broke down one day, Montañez took some of the iconic cheese powder home with him and had a realization: That stuff should be spicy. So he made a special blend, inspired by the seasonings put on Mexican street corn, and it went over so well with his loved ones he decided to pitch it to the executives at Frito Lay—and you know what, fam? They listened.

Reactions on Twitter have mostly been jokey in nature:

You guys keep making fun of the fact that Flamin’ Hot Cheetos are getting their own movie, but I think it looks amazing. pic.twitter.com/Iuc7ypGes0

Though one fan pointed out that there’s already a documented celebrity FHC-lover who might be a natural fit for the lead role:

If Oscar Isaac doesn’t play Richard Montanez in this movie then what is the point of anything? https://t.co/WLC4kcmLlP pic.twitter.com/7Cc88QpItH

Oscar Isaac, if you’re reading this: do it.