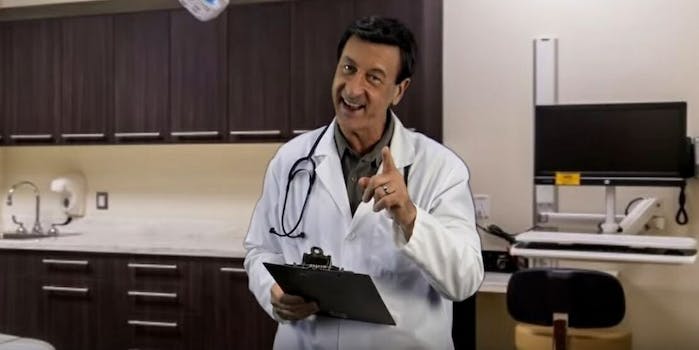 Friend goes viral for congratulating friend for losing his virginity, because of course

There's even an obligatory dab in the video.

A dude named Scott recently had sex for the first time. One of Scott’s friends wanted to pay tribute to this very important notch on the belt called manhood, so, naturally, he turned to Fiverr. There, he found a voiceover actor to play the role of a doctor checking out the results of Scott’s medical tests.

Yes, the actor/doctor could confirm after consulting with his clipboard: Scott was no longer a virgin.

Then, Scott’s friend put it all on YouTube for the world to see. Despite the toxic masculine trope of celebrating a guy who has sex as some kind of victory, the video has gone viral clip, trending on Reddit and racking up nearly 200,000 views in the day after it was uploaded.

In “Congrats Scott!” voiceover artist Frank George plays the part of doctor inspecting virginity, totally not like the deeply sexist practice of “inspecting” women for purity before marriage. It’s cool, though, because the dude who made the video probably hadn’t even considered that reference, since jokes about proving women’s chastity and men’s prowess are old hat.

“All right!” the actor exclaimed. “The tests have come back, and Scott is no longer a virgin. It says so here. We were all surprised, right? But we must take time to congratulate this boy and welcome him as a man.’

Then, he dabbed, because, of course.

According to YouTuber RJ Raccoon, who is apparently one of Scott’s friends, he paid $20 to George to rush-order the performance. Otherwise, it’s normally $10 for the actor to provide a 150-word message within three days complete with an HD video, a custom outfit, and a custom background. The clipboard, we assume, was included in the price—it’s unclear if the dab is negotiable.