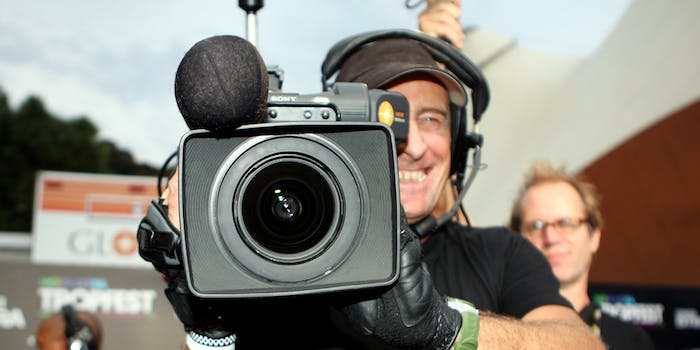 How #FilmDis is transforming the conversation about disability in film

A weekly Twitter chat is slowly creating a revolution for disabled representation in Tinseltown.

Film and disability don’t have to be mutually exclusive, but you wouldn’t know it from what Hollywood has to show you. While exploring gender, sexuality, race, and gender identity in film school, I felt compelled to look into how disability factored into film as well. That’s when I first decided to explore the complex issues surrounding both portrayals of disability in film and lack of representation for people with disabilities working in the film industry.

It led to a lively weekly Twitter conversation called #FilmDis, asking participants to discuss proposed topics such as whether nondisabled people should be given the opportunity to play characters with disabilities, which films or television shows get disability portrayals right, and how to work with allies in the film industry to encourage better casting of actors with disabilities.

As the lone student with a physical disability in my BFA program, I experienced resistance from my peers at every step of the way. Since we were constantly competing for spots, I was seen as the “weak link” and no one would work with me on any of my film projects. I realized early on that I was pretty much on my own. If I wanted to make it in film, I would have to find my own crew and show my professors I was just as capable. I decided to take an independent study on disability and film, to better understand the issues plaguing my community.

I quickly realized the problem was twofold—and that dealing with it was imperative.

First, how do we address the issue of portrayals of disability within film? The disability community struggles to agree on what is acceptable in large part due to our own internal prejudices, so it’s not an easy answer. However, most of us agree that being portrayed as plot devices where we’re only used to move the story forward for the protagonist (Dustin Hoffman’s character makes Tom Cruise’s character a better person in Rain Man) or being seen as nothing more than objects of pity who are suffering because of our disabilities (Mary McDonnell’s overdramatic portrayal as the alcoholic paraplegic in Passion Fish) are extremely problematic film tropes used in movies repeatedly.

The way we portray disability in film, on television, and in the media has direct implications for the disability community. If we are portrayed as helpless or pity-inducing, for example, people tend to treat us like we deserve pity. It becomes even more complex when you realize this can have direct implications concerning policy, which affects those of us with disabilities.

Actors with disabilities are often just as qualified as their able-bodied counterparts. Most are highly educated, many with college degrees and a high level of participation in workshops, classes, and other industry-based union activities, but barriers exist between inclusion and their employment in the industry. This contributes to the dismal realization of how little actors with actual disabilities truly work. Many still struggle to even be seen by casting directors.

As the number of characters with disabilities in film and television has risen, disabled parts have often gone to nondisabled actors pretending to be someone with a disability. While many of us feel the answer is to allow actors with disabilities to play any role that we physically can play, if we are not even able to play ourselves as people with disabilities, then who are we allowed to play?

As I delved deeper into the problem of disability in media, I also developed connections within the disability rights movement and realized I was not alone in my concerns about the treatment of disability in media. I started speaking out on social media, drawing upon my research and observations as a film school student. Going to film school helped me hone my analytical skills when it came to watching films. I was beginning to look at films in a completely different way. I wasn’t just watching films because I found them enjoyable. I was also looking at the social context of every piece of media I came across.

It is from there that the idea behind #FilmDis emerged. I was particularly inspired by Sarah Evans and #JournChat—something I had witnessed grow into a very large weekly discussion—and knew that her model could be replicable for discussions about disability in media. An audience who would be willing to discuss film and disability was clearly present on Twitter, and I had seen what Twitter evolved into as celebrities and many of those working in Hollywood began regularly engaging on social media. It was finally possible to reach the industry directly and get responses.

The first discussion was a general conversation about both perceptions of disability in film and a lack of representation by people with disabilities in front of and behind the camera. I was nervous, thinking nobody would want to participate in a scheduled chat. I was happily surprised when people showed up and kept coming back, week after week. We have many regular participants, such as disability rights activist and comedian Maysoon Zayid and disability rights activist and TV personality Lawrence Carter-Long.

It didn’t take long for people working in film who weren’t necessarily disabled themselves to take notice. One of our first special conversations was with the director and writer of Kelly & Cal, Jen McGowan and Amy Lowe Starbin, and we were thrilled to have director/writer Lexi Alexander (Green Street Hooligans, Punisher: War Zone) at a recent chat. Participant questions and comments have been carefully considered, and their thoughts are respectful. They genuinely seem to want to listen to what those of us with disabilities have to say, and help where they can.

In the months since I started #FilmDis, the number of participators has fluctuated, but the discussions remain vibrant and diverse. We are exploring essential issues, such as how intersectionality plays a role in disability representation, especially when it comes to race, gender, sexuality, and gender identity. We’ve had special guests that have included actors and crew members with disabilities working in the industry, such as actress Eileen Grubba and award-winning sound guru Jim LeBrecht. We are beginning to see the fruits of our labor pay off, as filmmakers working in independent film and those who have worked in mainstream Hollywood are starting to participate in the discussion.

#FilmDis is a weekly Twitter discussion held on Saturdays at 9pm ET. To participate, use the #FilmDis hashtag and follow moderator @DominickEvans.