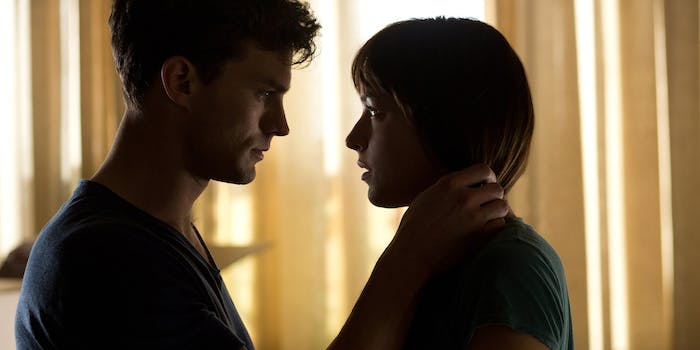 Screengrab from Fifty Shades Of Grey

A recent hashtag campaign wants you to donate to a women's charity instead of seeing the much-hyped film.

In the last few days, the #50dollarsnot50shades hashtag has been circulating on social media, asking people to donate to domestic abuse charities instead of seeing the movie. On Facebook, Tumblr and Twitter, supporters of the campaign are arguing that Fifty Shades romanticizes abusive behavior.

I cannot express how much the existence of this book & movie bothers me. #50DollarsNot50Shades #fiftyshadesisabuse pic.twitter.com/5pNfyy7cSQ

give to a domestic violence shelter instead of seeing this movie. #50dollarsnot50shades pic.twitter.com/iqcsWrc15X

As well as suggesting various charities and women’s shelters that need donations, the #50dollarsnot50shades hashtag campaign highlights disturbing passages from the book, including the many scenes that portray Christian Grey as manipulative and cruel.

This campaign has certainly drummed up some much-needed support for a handful of women’s charities, but it’s unlikely to make much of a dent in the film’s overall success. Ticket pre-sales are already through the roof, and Fifty Shades-related publicity is nigh unavoidable. Even on Tumblr, that bastion of feminism and social justice discourse, Fifty Shades of Grey was the No. 1 trending film last week, and all of the top posts are positive comments or GIFs from the trailer.